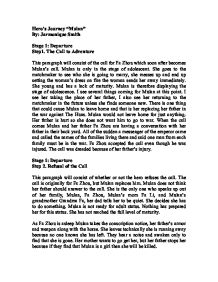 Hero's Journey "Mulan" By: Jarmonique Smith Stage 1: Departure Step1. The Call to Adventure This paragraph will consist of the call for Fa Zhou which soon after becomes Mulan's call. Mulan is only in the stage of adolescent. She goes to the matchmaker to see who she is going to marry, she messes up and end up setting the woman's dress on fire the woman sends her away immediately. She young and has a lack of maturity. Mulan is therefore displaying the stage of adolescence. I see several things coming for Mulan at this point. I see her taking the place of her father, I also see her returning to the matchmaker in the future unless she finds someone new. There is one thing that could cause Mulan to leave home and that is her replacing her father in the war against The Huns. Mulan would not leave home for just anything. Her father is hurt so she does not want him to go to war. When the call comes Mulan and her father Fa Zhou are having a conversation with her father in their back yard. All of the sudden a messenger of the emperor came and called the names of the families living there and said one man from each family must be in the war. Fa Zhou accepted the call even though he was injured. The call was dreaded because of her father's injury. ...read more.

No one wants to die. Mulan considers developing the qualities and skills needed to do well in the war with The Huns. This will be a big obstacle because The Huns are powerful. It will take a lot for her to develop or learn these qualities. Mulan's personality that will be mirrored back to her is belief in herself. Mulan believes that she can do this. That is the only thing she needs to accomplish her goal other than dedication. Mulan must develop several skills. She has to be able to climb a pole with heavy carrying heavy pendants to retrieve and arrow, break buckets with a stick, shoot several arrows through fruit, with a bucket of water on your head block several rocks thrown at you with a long skinny stick, catch fish using only your hands, dodge bullets, arm and fire weapons, and carry heavy materials up a hill. These tasks are hard. It will take a lot for Mulan to accomplish this but she will. Mushu assists her. He helps her cheat on a few tasks. He is caught by the Captain or Shang. Stage 2: Initiation Step 2.The Meeting with the Goddess This step is about the point in the adventure when Mulan experiences a love. In Mulan's case this step is about Shang and her developing feelings for him. When she couldn't complete the tasks he was unhappy with her. ...read more.

Stage 3: The Return Step 4. The Crossing of the Return Threshold This stage is about things returning back to normal. Mulan going home to her dad marks the return to her normal life. Mulan is back at home like she used to be. In her normal life she was with her family. Mulan does not face a challenge because she does not integrate the experience with her life. The only thing she takes from it is what she became. She became a young woman, no longer an adolescent. She does not talk about the war. She only gives the father the two rewards. Her father was proud. When Mulan returns everyone is happy. Mushu returns as a guide again. Her family embraces and loves her. Stage 3: The Return Step 5. Master of the Two Worlds This step is about the two worlds in Mulan's life. The two worlds are the war and normal life. The war is to become a past world since it is over and won. Her normal life becomes the main world just like things used to be. She does not demonstrate either of the two. She only shows them that she has changed. She left someone else and changed for the better. Stage 3: The Return Step 6. Freedom to Live This step is about her getting the freedom to live. She is a changed person. She now lives in the future and not in the past. She left an adolescent and returned a courageous young woman. Epic: This movie could be called an epic because Mulan is a true hero. ...read more.

This shows a detailed understanding of the film, Mulan and the challenges the hero faces.
There are some lapses in expression at times which make understanding some comments difficult.
** 2 Stars.