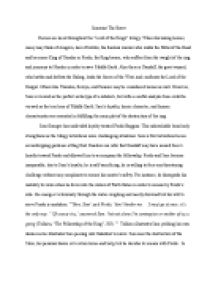 Heroes in &quot;The Lord of the Rings&quot;. Samwise The Brave

ï»¿Samwise The Brave Heroes are laced throughout the “Lord of the Rings” trilogy. When discussing heroes, many may think of Aragorn, heir of Isildur, the fearless warrior who walks the Paths of the Dead and becomes King of Gondor or Frodo, the Ring-bearer, who suffers from the weight of the ring and journeys to Mordor in order to save Middle Earth. Also there is Gandalf, the great wizard, who battles and defeats the Balrog, leads the forces of the West, and confronts the Lord of the Nazgul. Others like Théoden, Eowyn, and Faramir may be considered heroes as well. However, Sam is viewed as the perfect archetype of a sidekick, but with a careful analysis Sam could be viewed as the true hero of Middle Earth. Sam’s loyalty, heroic character, and human characteristics are essential in fulfilling the main plot of the destruction of the ring. Sam Gamgee has undivided loyalty toward Frodo Baggins. This unbreakable bond only strengthens as the trilogy introduces more challenging situations. Sam is first introduced as an eavesdropping gardener at Bag End. ...read more.

Even though he?s terrified that his master may be dead, he does not pause instead he attacks the giant spider. In order to help Frodo, Sam submits himself to carry the weight of the ring. As he returns from his trek, he discovers that the orcs have taken Frodo?s body. Sam overcomes his fear of the orcs and defeats Snaga that allows him to rescue Frodo from the Tower of Cirith Ungol. Many readers have overlooked Sam as a hero because he does not fit into the traditional category of a hero. He is not a great warrior who slays multitudes of orcs in battle. Since Sam has no warrior skill, he strives forward mainly relying on his courage and devotion to Frodo. He is a hobbit and a gardener; therefore, he is not significant or glorified nor is he of noble birth. Instead of possessing extraordinary strength or intelligence, Sam relies on his common sense and skills of observation. Throughout all of Sam?s deeds he remains humble and addresses Frodo as ?Master.? During the walk to the Crack of Doom, Samwise becomes weary and famished, but he notices that Frodo is weakening with every step. ...read more.

He is simply struggling with the ordinary feelings of optimism and anguish. Tolkien highlights more of Sam’s human characteristics as he describes Sam’s feelings toward Gollum. Gollum, in Sam’s opinion, is deceitful, evil, and foul hence his nickname “Stinker and Slinker.” He ignores what Gollum may have battled while he was in possession of the ring and his battle between himself, Sméagol and Déagol. Sam ultimately views Gollum the way the reader perceives Gollum. He is not to be trusted. In conclusion, many heroes are found within The Lord of the Rings trilogy. Sam’s loyalty and duty to serve his master keeps him persevering throughout his journey. The reader is left wondering if Gandalf really knew that Sam would play a vital role in the final result of the expedition or if Sam’s role in the quest was mainly determined by fate. Even though Sam is trying to endure the quest, he does experience inner conflicts. Through this, he is able to demonstrate his human characteristics. Without Sam’s character, the ring would not have been destroyed, and Middle Earth would not have been saved. Sam Gamgee is not only the book’s hero, but he is Frodo’s hero as well. ...read more.