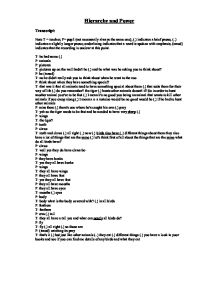 Hierarchy and Power Transcript: Note T = teacher; P= pupil (not necessarily always the same one); (.) indicates a brief pause; (..) indicates a slightly longer pause; underlining indicates that a word is spoken with emphasis; (inaud) indicates that the recording is unclear at this point. T: he had some (.) P: animals P: pictures T: pictures up on the wall hadn't he (.) and he what was he asking you to think about? P: he (inaud) T: no he didn't really ask you to think about when he went to the zoo P: think about when they have something special? T: that was it that all animals tend to have something special about them (.) that suits them for their way of life (.) do you remember? the tiger (.) hunts other animals doesn't it? So in order to hunt another animal you've to be fast (.) I mean it's no good you being an animal that wants to kill other animals if you creep along (.) I mean a s- a tortoise would be no good would he (.) if he had to hunt other animals P: miss there (.) ...read more.

This is the first indicator that the teacher has more power in the classroom than the children - she is the topic marker and the topic shifter. When the pupil answers the second question referring to what the zoologist was trying to make the pupils think about, the inaudible answer evokes the teacher to correct it and then steer the discussion in the way that she wants the discussion to go. Again, the phonology of this (the way that the teacher would say this) is important when the teacher answers "no he didn't really ask you to think about when he went to the zoo." If the teacher was to say this abruptly, it would discourage the students to continue offering their answers and what they were discussing and so yet again, it is necessary for the teacher to say this in a friendly manner whilst remaining in authority, telling the pupil the correct answer. This is another indicator to the pupil that the teacher is in power in the classroom; she knows the answers to her own questions whereas they do not know the answers for definite - this puts the pupils at a disadvantage in the classroom. ...read more.

that the discussion is becoming manic by prompting another question, provoking the answer "Feathers" to help the students calm down with their answers. The grammar used as the teacher speaks is very basic. This is because it would be difficult to understand the teacher (on the pupils' behalf) if she were to use complex grammar and grammatical structures. She only uses the present tense and the past tense - the two easiest tenses. This therefore shows a lack in the more complex grammar structures such as the conditional and the indicative mood; "were". Similarly, the teacher uses generalisations by using "all" a lot which makes the questions much easier to answer. That said, I believe the most difficult example of grammar which the teacher uses in this transcript is through anaphoric references; she often repeats the answers of her pupils by saying "its" and then the answer, meaning that that pupils may get lost as to what is being discussed if they haven't been listening to the teacher and the other pupils. This flouts one of H.P.Grice's maxims - the maxim of manner, which states that you should render your meaning as clear as possible, to avoid ambiguity, even if this ambiguity caused is due to the student's own fault by not listening. ...read more.