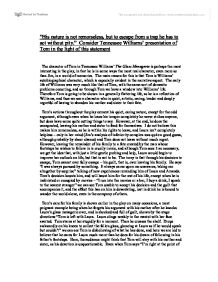 &quot;His nature is not remorseless, but to escape from a trap he has to act without pity.&quot; Consider Tennessee Williams' presentation of Tom in the light of this statement

"His nature is not remorseless, but to escape from a trap he has to act without pity." Consider Tennessee Williams' presentation of Tom in the light of this statement The character of Tom in Tennessee Williams' The Glass Menagerie is perhaps the most interesting in the play, in that he is in some ways the most real character, even more so than Jim, in a world of memories. The main reason for this is that Tom is Williams' autobiographical character, which is especially evident in the narrative aspect. The early life of Williams was very much like that of Tom, with the same sort of domestic problems occurring, and so through Tom we have a window into Williams' life. Therefore Tom is going to be shown in a generally flattering life, as he is a reflection of Williams, and thus we see a character who is quiet, artistic, caring, tender and deeply regretful of having to abandon his mother and sister to their fate. ...read more.

It always came upon me unawares, taking me altogether by surprise" talking of new experiences reminding him of Laura and Amanda. Tom's decision haunts him, and will haunt him for the rest of his life, except when he is inebriated or occupied by movies - "I run into the movies or a bar, I buy a drink, I speak to the nearest stranger" we can see Tom unable to accept his decision and the guilt that accompanies it, and the effect this has on him is devastating, lost in drink he is bound to wander the world alone, even in the company of others. Tom's care for his family is shown earlier in the play on many occasions, a most poignant example being when he forgets his argument with his mother after he knocks Laura's glass menagerie over, and is shocked and full of guilt, shown by the stage directions "Tom is left with Laura. Laura clings weakly to the mantel with her face averted. ...read more.

Through Tom, Williams is reflecting his own guilt, the guilt which meant the he felt the need to write plays like The Glass Menagerie. Tom is Williams, perhaps more eccentric and larger than life, but he is certainly more than just Williams' voice. Williams doesn't really attempt to mask that The Glass Menagerie is almost an autobiography, and that it is his vessel for saying sorry to his family, indeed he insinuates this when he says "The play is memory" which could very easily mean Williams' memory. Tom's terrible decision makes the play what it is, and gives one of the play's main themes a finale - the theme of not fulfilling ambition, of dreams that never come into fruition - as Tom leaves, he finds he cannot fulfil his dreams, so obsessed is he with the guilt of the decision. This vicious circle is the play's final note, a dark, brooding piece, and all created by Tom, as he was the first to speak, so he was the last, and as the play started on a dark, twisted note, so it ended in bleak, hopeless depression. ...read more.