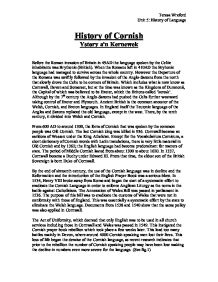 History of Cornish Ystory a'n Kernewek Before the Roman invasion of Britain in 49AD the language spoken by the Celtic inhabitants was Brythonic (British). When the Romans left in 410AD the Bryhonic language had managed to survive across the whole country. However the Departure of the Romans was swiftly followed by the invasion of the Anglo-Saxons from the north that slowly drove the Celts to he corners of Britain. Which includes what is now know as Cornwall, Devon and Somerset, but at the time was known as the Kingdom of Dumnonii, the Capital of which was believed to be Exeter, which the Britons called 'keresk'. Although by the 7th century the Anglo-Saxons had pushed the Celts further westward taking control of Exeter and Plymouth. Ancient British is the common ancestor of the Welsh, Cornish, and Breton languages. In England itself the Teutonic language of the Angles and Saxons replaced the old language, except in the west. There, by the tenth century, it divided into Welsh and Cornish. From 600 AD to around 1300, the form of Cornish that was spoken by the common people was Old Cornish. The last Cornish king was killed in 936. Cornwall became an earldom of Wessex under the King Athelstan. ...read more.

The revival of the Cornish language was first successfully attempted by Henry Jenner and Robert Morton Nance when they published A Handbook for the Cornish in 1904. They used what is know as Unified Cornish or Kernewek Unyes, and is largely based on Middle Cornish from the 14th and 15th centuries, which was a high point for Cornish literature. Kernewek Unyes had standardised spelling and an extended vocabulary that is mainly based on Breton and Welsh and for a long period was the modern Cornish language and many people still use it today. The second revival came over 70 years later in the early 1980s Richard Gendall, who had worked with Nance published a new system based on literary works of native writers such as Nicholas and John Boson, William Rowe and Thomas Tonkin. This system became Modern Cornish or Curnoack Nowedga. This differs from Unified Cornish by using the English based orthographies of the 17th and 18th centuries, though there are differences in vocabulary and grammar. More recently it has come to be known as Revised Late Cornish, as writers of Late Cornish often wrote Cornish using the English orthographic equivalent or the nearest English sound. ...read more.

There is now an increasing amount of Cornish literature, in which poetry is the most important genre, particularly in oral form or as song or as traditional Cornish chants historically performed in marketplaces during religious holidays, public festivals, gatherings, and executions. Cornwall County Council has, as policy, a commitment to support the language, and recently passed a motion supporting its being specified within the European charter for regional or minority languages. The language has financial sponsorship from many sources, including the Millennium Commission. Increasingly, churches have notices in Cornish and English. The take-up of the language is now becoming so widespread that language organisations are finding it difficult to keep up with demand. One organisation, Dalleth, promoted the language to pre-school children. There are many popular ceremonies, some ancient, some modern, which use the language or are entirely in the language. The language has been recognised as one of the five languages of the British Isles. This recognition should lead to greater access to funds from a variety of sources. Some of the supermarkets, municipal buildings (including public lavatories and council chambers) and even nightclubs in Cornwall now have a limited use of Cornish signage, an initiative made possible by a generous EU language and cultural heritage grant. Fig.1 The shifting of the linguistic boundary in Cornwall 1300-1750. ...read more.