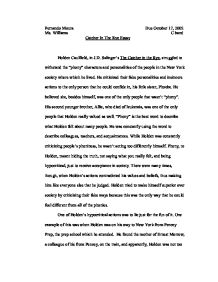 Holden Caulfield, in J.D. Salinger's The Catcher in the Rye, struggled to withstand the &quot;phony&quot; characters and personalities of the people in the New York society where which he lived.

Fernando Moura Due October 17, 2002 Ms. Williams C band Catcher In The Rye Essay Holden Caulfield, in J.D. Salinger's The Catcher in the Rye, struggled to withstand the "phony" characters and personalities of the people in the New York society where which he lived. He criticized their fake personalities and insincere actions to the only person that he could confide in, his little sister, Phoebe. He believed she, besides himself, was one of the only people that wasn't "phony". His second younger brother, Allie, who died of leukemia, was one of the only people that Holden really valued as well. "Phony" is the best word to describe what Holden felt about many people. He was constantly using the word to describe colleagues, teachers, and acquaintances. While Holden was constantly criticizing people's phoniness, he wasn't acting too differently himself. Phony, to Holden, meant hiding the truth, not saying what you really felt, and being hypocritical, just to receive acceptance in society. There were many times, though, when Holden's actions contradicted his values and beliefs, thus making him like everyone else that he judged. Holden tried to make himself superior over society by criticizing their fake ways because this was the only way that he could feel different from all of the phonies. One of Holden's hypocritical actions was to lie just for the fun of it. ...read more.

Holden, also like a good phony, would lie so that his state of thought would be accepted. He had quite a few teachers that were concerned about his future, and they gave him advice on what his plans for life should be. An example of one of these teachers is Mr. Spencer. He was Holden's History teacher and he was personally interested in the well being of Holden. He invited him over to his house one day, where they struck up a conversation that Holden found quite insolent and helpless. While Mr. Spencer was giving Holden advice and telling him the "truth about life," Holden was completely disagreeing with him, but he failed to tell him, and instead of being honest, he lied to him. Spencer said, " 'Life is a game my boy. Life is a game that one plays according to the rules.' 'Yes, sir. I know it is. I know it.' Game, my a*s. Some game...the other side, where there aren't any hot-shots, then what's game about it? Nothing. No game" (8). Holden's internal dialogue was completely contradictory to his actions here. This was the mentality of the perfect "phony," saying one thing, and thinking something completely different. Of course, Holden was lying to Spencer because he was seeking acceptance from him. ...read more.

Later that night, Holden finds Mr. Antolini padding his head while he was sleeping. Holden immediately puts his clothes on and leaves, and lies to Antolini telling him that he had to go to the train station to get his bags because he left all of his money in there (192). Holden likes and respects Mr. Antolini, and says that he is best teacher that he's ever had, yet he can't even be honest with him. It is understandable that Holden has had several encounters with "perverty" guys, but Holden should know how to differentiate between people that care about him, and people that don't. He's just "too good" to make any exceptions, and given that Holden has a lot of respect for Antolini, he is acting quite hypocritical by being so dishonest with him. The only difference between Holden and "phonies", is that Holden likes to point out and criticize their "phoniness", while the "phonies" just live their lives in a more normal way. By doing this, he automatically thinks that he is the "different superior" one, and that nobody else can see what he sees because they are too blinded by their own "phoniness". Being dishonest, having "compulsive lying disorder", and being a hypocrite, are all forms of "phoniness", and all of these features combined together, make up a "phony" person. Criticizing others in things that you do yourself is not going to make you superior; it will make you equal to them., and this, is what Holden failed to see. ...read more.