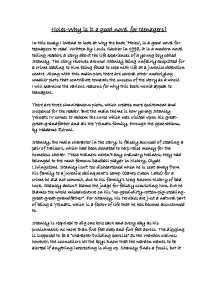 Holes-Why is it a good novel for teenagers?

Holes-Why is it a good novel for teenagers? In this essay I intend to look at why the book 'Holes', is a good novel for teenagers to read. Written by Louis Sachar in 1998, it is a modern novel telling readers a story about the life experiences of a young boy called Stanley. The story revolves around Stanley being unfairly acquitted for a crime leading to him being faced to cope with life at a juvenile detention centre. Along with this main plot, there are several other underlying smaller plots that contribute towards the success of the story as a whole. I will examine the various reasons for why this book would appeal to teenagers. There are three simultaneous plots, which creates more excitement and suspense for the reader. But the main theme is how young Stanley Yelnats IV comes to redeem the curse which was visited upon his great-great-grandfather and all the Yelnats family, through the generations, by Madame Zeroni. Stanley, the main character in the story, is falsely accused of stealing a pair of trainers, which had been donated to help raise money for the homeless shelter. These trainers weren't any ordinary trainers; they had belonged to the most famous baseball player in history, Clyde Livingstone. ...read more.

Being a teenager myself, I can understand what teenagers might feel whilst reading this book. At the end, Stanley was more of a hero rather than the ordinary teenager; I particularly admired this as it created feelings of motivation and achievement. Stanley's courage and patience gives hope to teenagers that they are also strong and capable to undergo testing incidents in life. His caring and helpful nature towards his friend reminds teenagers of the importance these qualities in everyone's lives. Teenagers can view Stanley as a role model due to his personal qualities and relationships with friends and all other at the Camp. He ended his and his best friend's punishment, and he also saved his friend from dying, alone in that dry desert. He went on looking for him and never gave up hope until he found him. This shows that they were true friends, and that's why teenagers would be amazed and shocked at what Stanley had done just for his friend. I feel that teenagers making such sacrifices for their friends these days, very rare. Stanley was very compassionate and helped teach Zero how to read; Zero had always dreamed of being able to read. ...read more.

Most of the story takes place on Green Lake, in Texas. This place is described as it was in the late 19th and late 20th centuries. There are also brief flashbacks to scenes in Latvia in the mid to late 19th century. Teenagers can relate to this story in some ways but because laws aren't always the same in different parts of the world, not all teenagers may be treated in the same way Stanley had been. This is why it might be interesting to see what different parts of the world are like. The story isn't really realistic either, because a teenager wouldn't really expect such events to take place in this day and age. A teenager may want to read something that could happen to them, but from someone else's point of view. The finding of treasure may seem to be an old-fashioned task and hence may not create the excitement that it was aimed for. Despite some not so appealing events in the story, I would recommend this book to all teenagers due to its suspense and excitement elements. The reader becomes intrigued to reach the ending, which is very successful in connecting all the sub plots to reveal the conclusion to the treasure and Stanley's family history. By Shahid Kibria 8s ...read more.