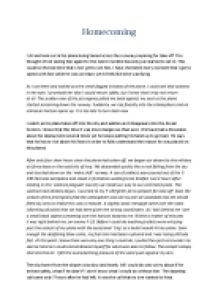 ﻿Homecoming I sit and look out at his plane being taxied across the runway preparing for take-off. The thought of not seeing him again for the next 8 months has only just started to set in. This could be the last time that I ever get to see him. I have cherished every moment that I got to spend with him while he was on leave, yet it feels like time was flying. As I sat there and looked out the small fogged window of the plane, I could see that sadness in her eyes. I promised her that I would return safely, but I knew that I may not return at all. The sudden roar of the jet engines jolted me back against my seat as the plane started screaming down the runway. Suddenly, we rise fluently into the atmosphere and an immense horizon opens up. It is too late to turn back now. I watch as his plane takes off into the sky and sadden as it disappears into the broad horizon. I knew that this time it was more dangerous than ever. We have had a discussion about his deployment several times yet he keeps putting his hand up to go back. He says that he has to rise above his fears in order to fully understand the reason he was placed on this planet. ...read more.

Looking around the cargo bay of the C-130, I absorbed the scenes in front of me. Off to the left were other injured troopers like me, sitting in a circle and playing a game of poker, happy to be going home. Beyond them there was a row of stretchers, filled with soldiers too tired or too injured to move. Some moaned in pain but most were silent. Off to the right of the cargo bay lay row after row of caskets with the Australian flag draped over the top of each one. It was a sickening sight. Row after row of caskets stacked on top of each other and tied to the wall with cargo ties. All those lives wasted. Lives that could have...did have...a large impact on the course of history. There were hundreds, thousands even, of casualties on both sides. At least, that was just an estimate. There were hundreds of people who during the war had just vanished. No one knows what had happened to them. They could have been killed and never found, prisoners of war camps, or even defectors. There was just no way to tell. I almost missed the smoke off to the side of the road. Curious, and with ample time to spare before I was supposed to be at the airport, I pulled over to see what was causing the smoke this far out of town. ...read more.

________________ DULCE ET DECORUM EST Bent double, like old beggars under sacks, Knock-kneed, coughing like hags, we cursed through sludge, Till on the haunting flares(2) we turned our backs And towards our distant rest(3) began to trudge. Men marched asleep. Many had lost their boots But limped on, blood-shod. All went lame; all blind; Drunk with fatigue; deaf even to the hoots(4) Of tired, outstripped(5) Five-Nines(6) that dropped behind. Gas!(7) Gas! Quick, boys! ? An ecstasy of fumbling, Fitting the clumsy helmets(8) just in time; But someone still was yelling out and stumbling, And flound'ring like a man in fire or lime(9) . . . Dim, through the misty panes(10) and thick green light, As under a green sea, I saw him drowning. In all my dreams, before my helpless sight, He plunges at me, guttering,(11) choking, drowning. If in some smothering dreams you too could pace Behind the wagon that we flung him in, And watch the white eyes writhing in his face, His hanging face, like a devil's sick of sin; If you could hear, at every jolt, the blood Come gargling from the froth-corrupted lungs, Obscene as cancer, bitter as the cud(12) Of vile, incurable sores on innocent tongues, My friend, you would not tell with such high zest(13) To children ardent(14) for some desperate glory, The old Lie; Dulce et Decorum est Pro patria mori.(15) Wilfred Owen 8 October 1917 - March, 1918 ...read more.