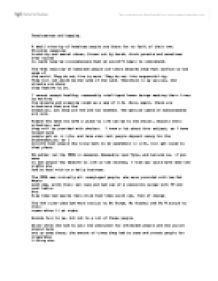 Homelessness and begging. A small minority of homeless people are there for no fault of their own. Children escaping brutality and s****l abuse, thrown out by harsh, drunk parents and sometimes even forced to leave home by circumstances that we couldn't begin to understand. The vast majority of homeless people are there because they wont conform to the ways of the world. They do not like to work. They do not like responsibility. They will not abide by the laws of the land. Therefore in my opinion, the streets are where they deserve to be. I cannot accept healthy, reasonably intelligent human beings wasting their lives by walking the streets and sleeping rough as a way of life. Sure, again, there are situations that are the exception, but they are few and far between. The genuine cases of homelessness are rare. Anyone who does not have a place to live can go to the social, explain their situation, and they will be provided with shelter. I know a lot about this subject, as I have helped many people get on in life, and have even lent people deposit money for the accommodation, as I believe that people who truly want to be somewhere in life, will get close to that place. ...read more.

I have heard of families who have been made homeless by other means, normally blamed on the local council or the government. I for one have never known anyone made homeless without being offered alternative accommodation. I am not saying everyone should be told where to live, and I truly believe that with soaring house prices, it wont be long before people will not be able to afford accommodation. What I will say though, is that people who are given a house by the local authorities have to respect the wishes of their neighbours as well as the general living code of life. Neighbours from h**l are not just a council estate disease, but sadly, the majority of them will be found there. That is no blight to council estates, I have lived there, my father still lives in council accommodation, and most of my family at one point have had to live in council funded/owned property. Sometimes though, we have to accept that some people do deserve what they get. Street begging is often an easy short term solution to cash problems for the homeless, but can also be a lucrative business for unscrupulous individuals and drug users. ...read more.

I also believe that some people will abuse your trust and help and are best suited for life on the streets where they can thrive in the community they belong in. Never give money to homeless people or beggars, but if you feel obliged by pity or by charity, then give something that will aid them, such as food, clothing or blankets. People who live on the streets usually do so due to the fact that they have no aspirations what so ever to find a job or get a place to live, and they do not want to live in accommodation provided by the correct authorities. Therefore I think they are best left alone and I wish them all the best, especially in this cold weather. My door is always open for anyone who genuinely wants to help themselves, and I will never turn my back on anyone, but I wont succumb to any form of mental games or pity when there is a big world of opportunity out there for everyone. Sorry if you feel I am harsh, but I have been in amongst the fire when the flames were at their highest, and I, along with everyone else who wanted to, managed to walk out without a singed hair. It's their choice most of the time, and with the odd exception, as I mentioned earlier, good luck. ...read more.