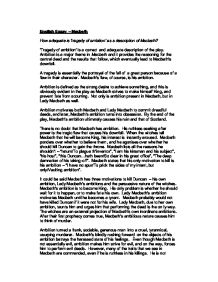 How adequate is 'tragedy of ambition' as a description of Macbeth?

English Essay - Macbeth How adequate is 'tragedy of ambition' as a description of Macbeth? 'Tragedy of ambition' is a correct and adequate description of the play. Ambition is a major theme in Macbeth and it provides the reasoning for the central deed and the results that follow, which eventually lead to Macbeth's downfall. A tragedy is essentially the portrayal of the fall of a great person because of a flaw in their character. Macbeth's flaw, of course, is his ambition. Ambition is defined as the strong desire to achieve something, and this is obviously evident in the play as Macbeth strives to make himself King, and prevent fate from occurring. Not only is ambition present in Macbeth, but in Lady Macbeth as well. Ambition motivates both Macbeth and Lady Macbeth to commit dreadful deeds, and later, Macbeth's ambition turns into obsession. By the end of the play, Macbeth's ambition ultimately causes his ruin and that of Scotland. ...read more.

Lady Macbeth, due to her own ambition, taunts him and urges him that performing the deed is the only way. The witches are an external projection of Macbeth's own inordinate ambitions. After their first prophecy comes true, Macbeth's ambitious nature causes him to think of murder. Ambition turned a frank, sociable, generous man into a cruel, tyrannical, usurping murderer. Macbeth's blindly rushing forward on the objects of his ambition betrays the harassed state of his feelings. Even though Macbeth is not essentially evil, ambition makes him strive for evil, and on the way, forces him to perform evil deeds. However, many of the traits that we see in Macbeth are commended, even if he is ruthless in his killings. He is not destitute of feelings, unlike a cold-blooded villain. He feels sympathy, remorse and pity. Lady Macbeth, on the other hand, is much more cold-blooded, and a character we fear because of that. Her obdurate strength of will and masculine firmness gives her the ascendency over her husband's faltering virtue. ...read more.

He silences his conscience and the voice of honour. After committing one murder, he embarks on more. Hiring assassins to kill Banquo and Macduff's family, his arrogance and determination lead him to believe he is invincible. Lady Macbeth's ambition leads to her downfall as well. The murder of King Duncan turns out to be too much for her. She falls into mental collapse, going insane. Near the end, she dies, supporting the description 'tragedy of ambition'. What could've been a great woman was instead led to a tragic end because of a flaw - her ambition. Macbeth's ambition gives him no satisfaction. He refuses to believe it until it is too late. What use is being King if his sons will not be next in line? His ambition ultimately causes his ruin and that of Scotland, where a country's health reflects that of its ruler. His death came about because of a tragic flaw in his character, like his wife - ambition. Through these reasons, 'tragedy if ambition' is a correct and adequate description of Macbeth, as ambition is the cause of the downfall of both Macbeth and his wife. ...read more.