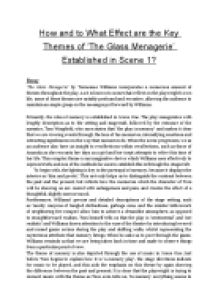 How and to What Effect are the Key Themes of The Glass Menagerie Presented in Scene One?

﻿How and to What Effect are the Key Themes of ?The Glass Menagerie? Established in Scene 1? Essay ?The Glass Menagerie? by Tennessee Williams incorporates a numerous amount of themes throughout the play. As it is known to somewhat reflect on the playwright?s own life, some of these themes are notably profound and evocative, allowing the audience to maintain an ample grasp on the messages put forward by Williams. Primarily, the idea of memory is established in Scene One. The play inaugurates with lengthy description as to the setting and stagecraft, followed by the entrance of the narrator, Tom Wingfield, who soon states that ?the play is memory? and makes it clear that we are viewing events through the lens of his memories, intensifying emotions and extracting significances in the way that memories do. When the scene progresses, we as an audience also have an insight to recollections within recollections, such as those of Amanda as she recounts her days as a girl and her inept attempts to relive this time of her life. This complex theme is an imaginative device which Williams uses effectively to express truth, and one of the methods he uses to establish this is through the stagecraft. To begin with, the lighting is key in the portrayal of memory, because it displays the interior as ?dim and poetic?. ...read more.

On the other hand, Tom and Laura are not such worldly characters, and whilst the latter wishes only to be permitted to coast through life without any demands, the former, although also having no desire to connect with others, has a slightly clearer vision of an aim in life, and values seclusion as a way of being able to continue with his creative work as a poet. As a playwright, Tennessee Williams portrays this theme through many different techniques. Firstly, the setting is used by showing the family home as ?dim? with ?old-fashioned? features; a place from which the characters would evidently love to escape, Tom in particular. Therein hangs ?a blown-up photograph? of Amanda?s ex-husband and Tom and Laura?s father, which is a constant reminder to Amanda of the life she once had and emphasizes not only the dreams she has of finding Laura a ?gentleman caller? and attaining financial security, but also how she would possibly like to return to the days when she was young and had considerable male interest. A further theme established by Williams in Scene One which links in with dreams and illusions is entrapment. In spite of the near impossibility of each character?s dreams being accomplished, Williams is adamant that entrapment must be resisted despite the suffering it entails, and this is primarily introduced through the character portrayal of Tom. ...read more.

We start to see the Wingfields struggle against emotional and physical confinement, such as the previously mentioned difficulties Tom faces in wishing to leave the house, and also how Laura doesn?t feel the same way as her mother in regards to ?gentleman callers? due to her disability and lack of self-confidence. However, Williams does not provide the characters with solutions to these troubles but instead indicates that they possess positive characteristics which encourages them to carry on. For example, Scene One shows Amanda constantly wittering on with pride about how ?one Sunday afternoon in Blue Mountain? she received ?seventeen!? gentleman callers, to the slight irritation of Tom, who, accustomed to this, has predicted it, but Laura is aware of how the family need to stick together and respond to each other needs, and advises Tom to ?let her tell it?. Therefore, through the portrayal of each character, Williams shows that endurance is an important theme in ?The Glass Menagerie?, to the effect that we as an audience appreciate each of them individually for their qualities as well as the times when they err. Thus, we can see that Scene One of ?The Glass Menagerie? by Tennessee Williams encompasses a number of themes in a variety of different ways, all to meaningful and dramatic effects. We learn that some of these methods include character portrayal, setting and stagecraft, but all are equally significant and allow us to grasp the key messages portrayed by the playwright. ...read more.