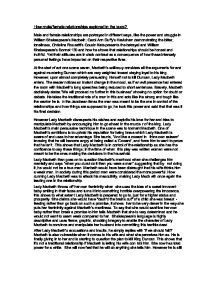 How male/female relationships explored in the texts? Male and female relationships are portrayed in different ways, like the power and struggle in William Shakespeare's Macbeth; Carol Ann Duffy's Havisham demonstrating the bitter, loneliness, Christina Rossetti's Cousin Kate presents the betrayal and William Shakespeare's Sonnet 130 and how he shows that relationships should be honest and truthful. Yet their attitudes are in stark contrast as a consequence of how these intensely personal feelings have impacted on their respective lives. At the start of act one scene seven, Macbeth's soliloquy considers all the arguments for and against murdering Duncan which are very weighted toward staying loyal to his king. However, upon almost completely persuading himself not to kill Duncan, Lady Macbeth enters. The reader notices an instant change in the mood, as if an evil presence had entered the room with Macbeth's long speeches being reduced to short sentences. Bravely, Macbeth decisively states "We will proceed no further in this business" showing no option for doubt or debate. He takes the traditional role of a man in this and acts like the strong and tough like the warrior he is. In the Jacobean times the man was meant to be the one in control of the relationships and how things are supposed to go, he took this power and said that that was it his final decision. However Lady Macbeth disrespects his wishes and exploits his love for her and tries to manipulate Macbeth by encouraging him to go ahead in the murder of the king. Lady Macbeth's main persuasive technique in the scene was to torment Macbeth. One of Macbeth's ambitions is to uphold his reputation for being brave which Lady Macbeth is aware of and uses to her advantage. She taunts, "And live a coward in thine own esteem" knowing that he will become angry at being called a 'Coward', and force him to want to prove that he isn't. ...read more.

This straddles the break between verses, and shows the unstable mixture of Havisham's emotions. The second stanza of 'Havisham' is full of sadness, and the speaker has moved from a position of total fury and resentment into a state of depression; this stanza brings in the element of decay into the emotional, and physical, state of Miss Havisham and her possessions, she despises herself as 'spinster.' The dramatic start once more draws the reader's attention to the poem, and the word 'spinster' itself makes Miss Havisham incomplete, and is without someone to love, it means elderly single women with no children, as at the time this poem was set it was almost strange to see unmarried women, this one word sentence is what she is, what society sums her up as, what she has been condemned to be by the man's abandonment of her almost as if there would be nothing more to say about her for the rest of society. After Havisham was left at her wedding she never recovered this led to her sitting in her chair in her wedding dress not doing anything or going anywhere just sitting there wasting away, smelling and putting herself down "I stink and remember." this is good use of onomatopoeia and gives the reader a view of what she was like and what the smell was like. She's is wallowing in her own pity, knows that she 'stinks' but doesn't care. Throughout the poem it goes through her mental state of mind, from the words Duffy uses you can see she has had a bit of an emotional rollercoaster, in the poem you can see Duffy is interested in mixing her love and hatred as it shows Havisham's s****l passion has not ended yet. By looking at the structure in Havisham Duffy has created an effect that shows Havisham's hatred for men, how much men have put her through but still shows she isn't a ruin yet as she still has a s****l passion, however ...read more.

This links in with the unnamed maiden as she has no power in society because she is an 'outcast' although she has power over the lord because she has his son and he would give anything to have him. In the Sonnet 130 it shows an equal loving relationship and it shows relationships in a realistic way. In 'Macbeth' at first Shakespeare portrays their relationship is equal as they go on how they want to do everything together, however to the end the Macbeth starts not to care as much and Shakespeare puts dark imagery into the play and shows that when Lady Macbeth dies at the end Macbeth doesn't care. In 'Cousin Kate' Rossetti shows the traditional side of relationships and how if you lose your virginity before marriage it could really impact your life, she showed a non-requited love as the unnamed maiden obviously wants the lord back although she is angry but he doesn't want her. In 'Havisham' Duffy shows the negative side of love and the aftermath of a relationship which ended in a bad way, Miss Havisham wants to get her revenge as in the poem it keeps referring to violent things and it had an angry aggressive, bitter tone to the poem. Over all I preferred Shakespeare's Sonnet 130 because I think it portrayed relationships in a realistic way, I think that act 1 scene 7 in Macbeth also had a realistic view to their relationship although they were planning to kill a person. I enjoyed Havisham it was a good poem and it showed the negative side of a relationship although it might have been a little over exaggerated because it's only her view we hear this is the same with cousin Kate where the unnamed maiden tells her own side of the story and make people feel sorry for her but I think there was more to it and it would be nice to know her cousin Kate's side of the story. ?? ?? ?? ?? ...read more.