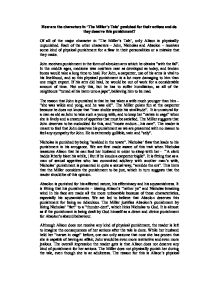 How are the characters in The Miller(TM)s Tale(TM) punished for their actions and do they deserve this punishment?

How are the characters in 'The Miller's Tale' punished for their actions and do they deserve this punishment? Of all of the major character in 'The Miller's Tale', only Alison is physically unpunished. Each of the other characters - John, Nicholas and Absolon - receives some kind of physical punishment for a flaw in their personalities or a mistake that they make. John receives punishment in the form of a broken arm which he obtains "with the fal". In the middle ages, medicine was nowhere near as developed as today, and broken bones would take a long time to heal. For John, a carpenter, use of his arms is vital to his livelihood, and so this physical punishment is a lot more damaging to him than one might expect. If his arm did heal, he would be out of work for a considerable amount of time. ...read more.

Nicholas' flaw that leads to his punishment is his arrogance. We are first made aware of this trait when Nicholas reassures Alison that he can fool her husband in order to sleep with her - "A clerk hadde litherly biset his while, | But if he koude a carpenter bigile". It is fitting that as a man of sexual appetites who has committed adultery with another man's wife, Nicholas' punishment is presented in quite a sexual way, "amidde the ers". This hints that the Miller considers the punishment to be just, which in turn suggests that the reader should be of this opinion. Absolon is punished for his affected nature, his effeminacy and his squeamishness. It is fitting that his punishments - kissing Alison's "nether ye" and Nicholas breaking wind in his face are made all the more unbearable because of these characteristics, especially his squeamishness. ...read more.

The ending of the tale suggests that all has turned out as it should. The Miller sums up very hastily in five lines, expressing how each of the male characters has been punished. The alacrity of the Miller's conclusion also hints that we are not meant to dwell on the fate of the tale's characters. The tale is not a sermon from which the reader is meant to draw a message or a moral, but it a lewd and bawdy story merely meant to entertain. We are not meant to dwell on whether or not justice has been served because these are not realistic portraits of characters, but merely caricatures. We feel no sympathy for any of them as the Miller has not presented them as complex psychological studies of human nature that we can identify with on a personal level. Instead he uses stock characters that are somewhat two-dimensional to create an engaging and vulgar story. ...read more.