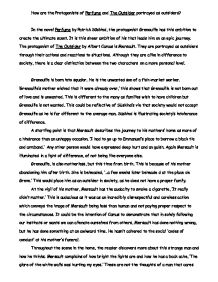 How are the Protagonists of Perfume and The Outsider portrayed as outsiders?

How are the Protagonists of Perfume and The Outsider portrayed as outsiders? In the novel Perfume by Patrick S?skind, the protagonist Grenouille has this ambition to create the ultimate scent. It is this sheer ambition of his that leads him on an epic journey. The protagonist of The Outsider by Albert Camus is Mersault. They are portrayed as outsiders through their actions and reactions to situations. Although they are alike in difference to society, there is a clear distinction between the two characters on a more personal level. Grenouille is born into squalor. He is the unwanted son of a fish-market worker. 'Grenouille's mother wished that it were already over,' this shows that Grenouille is not born out of love and is unwanted. This is different to the many as families wish to have children but Grenouille is not wanted. This could be reflective of S�skind's vie that society would not accept Grenouille as he is far different to the average man. S�skind is illustrating society's intolerance of difference. A startling point is that Mersault describes the journey to his mothers' home as more of a hindrance than an unhappy occasion. 'I had to go up to Emmanuel's place to borrow a black tie and armband.' ...read more.

These were not the acceptable actions of a recently bereaved person. These actions present Mersault as an outsider in that way that he has subversive actions following such a great loss. Many people would go into mourning and not socialise but Camus presents Mersault as an outsider by doing the opposite. Mersault will only do something if he feels like it. This is evidence of his existentialist lifestyle. Mersault does not know that he leads this lifestyle but there is plenty of evidence to support it. Existentialism is a philosophical movement which emphasises individual freedom and choice. Camus intends to portray Mersault as an outsider using Existentialism in the way that Mersault would now do as he pleases and when he wants to. With little or no thought to how this would affect those around him - Mersault acts out of necessity. An example is where Mersault wants a cigarette, therefore he has it. This is strange as the context is that he has lost his mother and he is in the presence of a dead body. Mersault treats any situation the same, with no consideration of factors that could change society's view. ...read more.

Mersault is human, he does have all the characteristics of a human, but because he lives his life differently he is deemed an outsider. His sometimes antisocial behaviour acts as a block to prevent the protagonist developing through interaction with other characters which would inform the reader of less concerning the character. Sometimes the information supplied about others is in almost as much detail as all the reader learns of Mersault in the novel by Camus. Grenouille is portrayed as an outsider as he is a killer. He is singled out quite strongly as he is committing murder and demonstrating his hatred for others. He too does not follow the accepted ways of society but kills for a higher good, to make the ultimate scent. Not only does is he a killer but S�skind sets out to make him outsider in his attitude towards mankind. Grenouille often associates Man with trash and rotting garbage as he has had to escape the smell of mankind that could sometimes be as, 'ghastly as the stench of manure.' This anti-social behaviour would single Grenouille out as he would have few relationships or contact with humans. Word count : 1,274 ...read more.