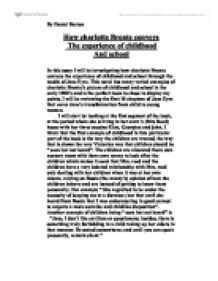 How charlotte Bronte conveys the experience of childhood and school.

How charlotte Bronte conveys The experience of childhood And school In this essay I will be investigating how charlotte Bronte conveys the experience of childhood and school through the media of Jane Eyre. This novel has many varied examples of charlotte Bronte's picture of childhood and school in the early 1900's and is the perfect book to chose to display my points. I will be reviewing the first 10 chapters of Jane Eyre that cover Jane's transformation from child to young woman. I will start by looking at the first segment of the book, at the period where she is living in her aunt 's (Mrs Reed) house with her three cousins Eliza, Georgina and john. I think that the first example of childhood in this particular part of the book is the way the children are treated, the way that is shows the very Victorian way that children should be " seen but not heard". The children are allocated there own nursery room with there own nanny to look after the children which makes it seem that Mrs. reed and the children have a very isolated relationship with Mrs. reed only dealing with her children when it was at her own leisure, relying on Bessie (the nanny's) ...read more.

The tensions of this contradiction emerge in the very first chapter of the novel, when Jane suffers teasing and punishment at the hands of John Reed .A good reference to the bullying is the incident in the first chapter when john confronts Jane for no reason telling her that "You have no business to take our books; you are a dependent, mama says; you have no money; your father left you none; you ought to beg, and not to live here with gentlemen's children like us, and eat the same meals we do, and wear clothes at our mama's expense" this shows how she in made to feel inferior to the other children . But this is not the only way in which young jane is made to feel inferior she also shows that she feels inferior in looks and ability as she says in the book "? Eliza, who was headstrong and selfish, was respected. Georgiana, who had a spoiled temper, a very acrid spite, a captious and insolent carriage, was universally indulged. Her beauty, her pink cheeks and golden curls, seemed to give delight to all who looked at her, and to purchase indemnity for every fault." This shows how she feels that she is inferior to the other children but also shows how she is jealous of the girls for what they have, a trate famous amoung young children. ...read more.

What a great nose! And what a mouth! And what large prominent teeth! "No sight so sad as that of a naughty child," he began, "especially a naughty little girl. Do you know where the wicked go after death?" "They go to h**l," was my ready and orthodox answer. "And what is h**l? Can you tell me that?" "A pit full of fire." "And should you like to fall into that pit, and to be burning there for ever?" "No, sir." "What must you do to avoid it?" I deliberated a moment; my answer, when it did come, was objectionable: "I must keep in good health, and not die." This shows perfectly how young children can be very insolent and cheeky in a way that no adult can question because of the way she speaks so innocently, even though Mr. Brocklehurst is sure that Jane has said this last sentence in an impertinent way he is powerless to question it. This is a very common trait in children and is very subtly used in this extract. In conclusion I think that conveys childhood very well throughout the first 10 chapters in many ways, picking up on many childhood traits and actions that most other authors would not be able to do. I also believe that the best ways she does this is through her subtle dialogue between the characters. By Daniel Barton ...read more.