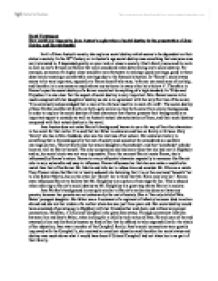 How could you respond to Jane Austen's exploration of social destiny in the presentation of Jane Fairfax and Harriet Smith?

Romi Verstappen How could you respond to Jane Austen's exploration of social destiny in the presentation of Jane Fairfax and Harriet Smith? In all of Jane Austen's novels, she explores social destiny which seems to be dependent on their status in society. In the 19th Century or in Austen's age social destiny was something that everyone was very interested in. It depended greatly on your rank or class in society. One's family name and its roots as well as one's fortune are factors that were considered when determining one's social destiny. For example, someone of a higher class would be more fortunate in making a good marriage; good in those days mainly meaning a comfortable marriage due to the financial situation. In "Emma", social status seems to be very important, especially to Emma herself who says, 'a farmer can need none of my help, and therefore is in one sense as much above my notice as in every other he is below it'. Therefore in Emma's eyes the social destiny of a farmer would not be anything of a high standard. In 'Pride and Prejudice it is also clear that the aspect of social destiny is very important. Mrs. Bennet seems to be much occupied with her daughters' destiny as she is in agreement with the very first line of the novel, 'It is universally acknowledged that a man with a fortune must be in want of a wife'. ...read more.

Knightley is a great step above Harriet in society. Jane Fairfax's background is one quite similar to Harriet's as she also does not have any parents; however her parents are not unknown by the rest of society. She is 'the only child of Mrs. Bates' youngest daughter. Her father was a Lieutenant of a regiment of infantry however died in action abroad and she lost her widow of a mother when she was just three years old. Her social destiny would have consisted of growing up in Highbury with her Grandmother and Aunt, and without any proper connections. However, it is Colonel Campbell who gives Jane status. Through convenient relations between him and Jane's father, when looking for a child he took notice of Jane. He took care of her and eventually him and his family became so fond of her that he offered to take responsibility for the whole of her education; Jane was a member of the Campbell family. Jane's social connections were greatly improved with the Campbell's, she received an excellent education and therefore her social status and destiny was much above what it would have been if Colonel Campbell had not taken her in as part of their family. ...read more.

Mr. Martin seems to be a character which is suitable for Harriet's status in society. He is a farmer, and despite what Emma says, he is perfectly suited for her. Despite Emma being sure that Harriet's actual destiny was to marry Mr. Elton and at one point even Frank Churchill, it is in fact to marry Mr. Martin. It is clear right from the beginning of the novel that Harriet is extremely fond of Mr. Martin., 'she loved to talk of the pleasures of her visit', she even stands up for Mr. Martin during Miss Woodhouse's 'interrogation'. When Mr. Martin proposes for a second time she ecstatic with happiness and even though she believes that Emma will have a negative opinion on the marriage she is very certain in wanting to marry him. It is indeed a love match. After analysing Jane's background and Austen's presentation of her, it seems that even though she is extremely intelligent and had great accomplishments for women of that time, her social destiny would have been a governess and she could end up as a spinster for she was an orphan and had no fortune. However, we learn towards the end of the novel that Jane is in fact secretly engaged to Frank Churchill. Therefore her actual destiny is to marry Frank Churchill and again is similar to Harriet's actual destiny as it is also a love match. ...read more.