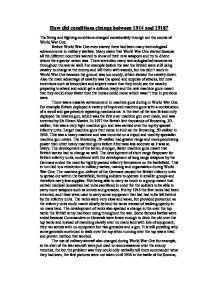 How did conditions change between 1914 and 1918? The living and fighting conditions changed considerably through out the course of World War One. Before World War One even started there had been many technological advancements in military warfare. Many claim that World War One started because all the different countries wanted to show of their new weapons and try to divine whom the superior nation was. There were also many technological advancements throughout the war as well. For example before the war the British were still using cavalry to charge at the enemy and kill them with swords, but his didn't work in World War One because the ground was too muddy, which slowed the cavalry down. Also the main advantage of cavalry was the speed and surprise of attacks, but new inventions such as binoculars and snipers meant that they could see the cavalry preparing to attack and could get a defence ready and the new machine guns meant that they could shoot faster than the horses could move which wasn't true in previous wars. There was a massive advancement in machine guns during in World War One. ...read more.

The machine gun defence of the Germans caused the British infantry units to spread out within the battlefield, forcing soldiers to operate in smaller groups and therefore carry less supplies. Not being able to carry as much in a group meant that certain medical necessities had to be sacrificed in order for the soldiers to be able to carry more weapons such as knives and grenades. But by 1916 the first tanks had been invented, and these were used to carry some equipment that had had to be left behind by the infantry units. The tanks were very slow and weak, but provided protection as the infantry units could march slowly behind the tanks instead of walking openly in no mans land. The development of tanks also sparked a change in the over the top tactic the British army had been using throughout the war. Some famous battles were ended because Commanders or Generals were brave enough to ditch the old over the top tactic and instead of marching slowly over no mans land with lots of equipment, they ran across with no equipment but two grenades and a gun. ...read more.

The first time the Germans used gas they sent over causing death and panic in the British trenches but hen they advanced the wind suddenly changed direction and caused more German than British casualties. Later in World War One the Germans introduced Phosgene gas which was the same as chlorine but much more powerful and in 1917 they introduced mustard gas, which had no smell so was impossible to detect at night. The gas would temporarily blind its victims, burn their skin and poison their lungs. In most cases death was slow painful usually taking up to four weeks. There weren't that many developments in the living conditions for the British soldiers. There were minor medical advancements such as the use of herbs mixed into the scalp to prevent lice and soldiers would have improved damp protective clothing to try and stop things such as trench foot and all soldiers were also issued with personal med kits and gas mask. Supply got better so they had more food but the food was much worse. As it had to be mass-produced, packed and shipped, which meant ruled most foods out, and the food would have to things that didn't have to be cooked as they couldn't create fires in the damp and cold conditions. ...read more.