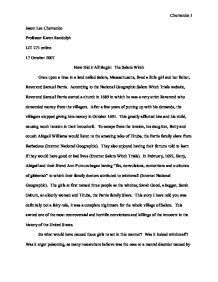 How Did it All Begin: The Salem Witch Trials

Jason Lee Chernenko Professor Karen Randolph LIT 271 online 17 October 2007 How Did it All Begin: The Salem Witch Once upon a time in a land called Salem, Massachusetts, lived a little girl and her father, Reverend Samuel Parris. According to the National Geographic Salem Witch Trials website, Reverend Samuel Parris started a church in 1689 in which he was a very strict Reverend who demanded money from the villagers. After a few years of putting up with his demands, the villagers stopped giving him money in October 1691. This greatly affected him and his child, causing much tension in their household. To escape from the tension, his daughter, Betty and cousin Abigail Williams would listen to the amazing tales of Tituba, the Parris family slave from Barbadoes (Internet National Geographic). They also enjoyed having their fortune told to learn if they would have good or bad lives (Internet Salem Witch Trials). In February, 1692, Betty, Abigail and their friend Ann Putnum began having "fits, convulsions, contortions and outbursts of gibberish" to which their family doctors attributed to witchcraft (Internet National Geographic). ...read more.

First of all, some have hypothesized in the past that the fits the girls were having could be a result of ergot poisoning from spoiled rye grain. With this being said, the girls could not possibly been having these fits from ergot poisoning only during specific times, such as when supposed "witches" were on trial. For example, during the trial of Rebecca Nurse, whenever Rebecca would move her body in agitated motions, the accusers would also contort their bodies in the same way, crying out in pain every time Rebecca would move (Internet Salem Witch Trials). If they had been poisoned by ergot, they would not be acting in this manner at any given moment. Next, the Salem Witch Trials were not a result of witchcraft, as the website Salem Witch Trials argues. Betty Parris and her cousin Abigail Williams often experimented with fortune telling (Internet Salem Witch Trials). At one time, while looking into a "venus glass" they saw a specter of a coffin (Salem Witch Trials). ...read more.

This put a lot of strain on her family. I conclude that this stress, along with Betty's sorcery beliefs lead to her breakdown and the mass hysteria of others. As stated above, not only were the poor accused of witchcraft, but also the church elite, which were the people that were actually going against the Harris family. Betty Harris finally lost it and wanted restitution for all the hurt that was felt by her family. After it started with Betty Harris, it just got out of control with the other accusers and mass hysteria started. People started claiming that they saw specters just to avoid being accused or their families being accused. In conclusion, though there is not a definite reason as to why the girls began acting in fits, the result of those fits were 25 innocent people's deaths. These episodes were due to the breakdown of Betty Harris from tension on her family by the villagers and the mass hysteria of witches spreading to others. This has been an on-going debate amongst many researchers and American historians. ?? ?? ?? ?? Chernenko 3 Chernenko 1 ...read more.