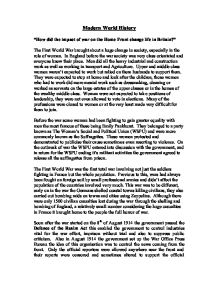 &quot;How did the impact of war on the Home Front change life in Britain?&quot;

Modern World History "How did the impact of war on the Home Front change life in Britain?" The First World War brought about a huge change in society, especially in the role of woman. In England before the war society was very class orientated and everyone knew their place. Men did all the heavy industrial and construction work as well as working in transport and Agriculture. Upper and middle class women weren't expected to work but relied on there husbands to support them. They were expected to stop at home and look after the children, those women who had to work did more menial work such as dressmaking, cleaning or worked as servants on the large estates of the upper classes or in the homes of the wealthy middle class. Woman were not expected to take positions of leadership, they were not even allowed to vote in elections. Many of the professions were closed to women or at the very least made very difficult for them to join. Before the war some woman had been fighting to gain greater equality with men the most famous of these being Emily Pankhurst. They belonged to a party known as The Woman's Social and Political Union (WSPU) and were more commonly known as the Suffragettes. These women protested and demonstrated to publicise their cause sometimes even resorting to violence. On the outbreak of war the WSPU entered into discussion with the government, and in return for the WSPU ending it's militant activities the government agreed to release all the suffragettes from prison. ...read more.

One of the first tasks of the WPB was to encourage recruitment. Various methods were used to encourage men to join the army, recruitment posters of the time encouraged men to join up to protect there woman and children from the horrors of war. Some posters showed pictures of woman urging their men to: 'GO' Others used the slogan 'REMEMBER BELGIUM' Perhaps the most famous poster was the one featuring Lord Kitchener pointing his finger the caption reads: 'JOIN YOUR COUNTRYS ARMY' The poster seems to be pointing directly at you wherever you stand. Some posters were aimed directly at woman they were designed with the express purpose of encouraging woman to put pressure on there husbands or sons to join up. One poster says: 'Is your boy wearing khaki if not don't you think he should be' Another poster from the mothers union said: 'My boy I don't want you to go but don't you think you should'. Emily Pankhurst and some of the other suffragettes played an important role as speakers at meetings urging young men to join up, and there were a number of other organisations which sprang up around this time. The Active Service League was one in which Woman swore an oath promising to try there hardest to persuade men to join up and refusing to go out in public with men who were not in uniform. Another organisation was The Order of the White Feather in which women were encouraged to give white feathers to men who had not joined the army. ...read more.

Women were expected to return to their pre war role and allow men to take their place. From the Southampton Times 1919 'Women who left domestic service to enter the factory are now required to return to their pots and pans' Soon their were even fewer women in work then their had been before the war. It was clear however that women's attitudes had changed in general they had more confidence and in many cases were unwilling to do menial tasks such as domestic service. Most people realised that the country could not have survived during the war without the contribution given by woman. Asquith who had been prime minister before the war and an opponent to giving women the vote said in 1917: "Some years ago I used the expression 'let the women work out their own salvation'. Well sir they have worked it out during the war. How could we have carried on without them?" It was clear that most MP agreed with him and in 1917 a new bill was passed allowing woman over 30 the right to vote. Some other changes occurred after the war, educated women were able to become lawyers or architects and allowed to serve on a jury. Peoples attitudes had changed during the war, you could say the war acted as a catalyst for change. Sources of information : The Twentieth Century World--------N. Kelly M. Whittock Modern World History-----------------Ben Walsh www.spartacus.schoolnet.co.uk www.historychannel.com www.bbc.co.uk/history ...read more.