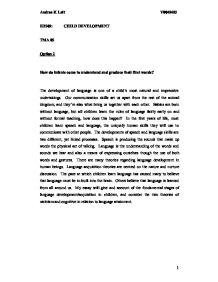 How do infants come to understand and produce their first words?

Andrea K Lait V0049493 ED209: CHILD DEVELOPMENT TMA 05 Option 2 How do infants come to understand and produce their first words? The development of language is one of a child's most natural and impressive undertakings. Our communication skills set us apart from the rest of the animal kingdom, and they're also what bring us together with each other. Babies are born without language, but all children learn the rules of language fairly early on and without formal teaching, how does this happen? In the first years of life, most children learn speech and language, the uniquely human skills they will use to communicate with other people. The developments of speech and language skills are two different, yet linked processes. Speech is producing the sounds that make up words the physical act of talking. Language is the understanding of the words and sounds we hear and also a means of expressing ourselves though the use of both words and gestures. There are many theories regarding language development in human beings. Language acquisition theories are centred on the nature and nurture discussion. The pace at which children learn language has caused many to believe that language must be in-built into the brain. Others believe that language is learned from all around us. My essay will give and account of the fundamental stages of language development/acquisition in children, and consider the two theories of nativism and cognitive in relation to language attainment. ...read more.

For example using the word 'doggy' for all small animals with four legs, suggest they have established a categorical cue of an object with four legs. Bruner (1975, 1983) points out that children are helped to form categories, in that the language they encounter at this stage is very much in a social context and parents are constantly talking about objects activities around the child, so enabling the child to link what is being said with an object or event that is happening. Baldwin (1995) studied the learning of new words by examining the implication of pointing which infants carried out with objects while interacting with adults and found that they spent longer looking at objects that adults were looking at as well. Thus, reinforcing the idea about social context assisting language acquisition. The above discussion as to how language develops in infants and the speed at which it progresses has prompted many theorists to believe that language must be in build into the brain, and that we are born with this in built device which predisposes us to acquire language. Children's ability to pick up language so rapidly and to continue to develop and communicate effectively in their environment suggests that both nature and nurture play an important role for language development and help to mature and strengthen an infant's language skills. Language development also follows a similar pattern across cultures predisposes the probability that it is somehow �wired in' to the human brain. ...read more.

Harris et al 1988 conducted a study to find out the degree of word learning that occurred from the experience the child had with their mothers, and found that there was a close similarity between the child's first words ant those that had been used by the mother. A later study conducted with children with slower language development showed that in general these mothers did not use specific object names but used general names such as "one" or "thing" to refer to an object. This illustrates the importance of maternal speech and interaction with the child in order to stimulate cognitive development and aid early language development. In conclusion it is apparent that children in all cultures follow the same progression when learning their native language. Innate theories argue that it is an inbuilt system and its acquisition is independent of social and cognitive development. Cognitive theories argue for the role of experience, and child directed learning with regards speech and general cognitive development. The environment obviously has an affect in shaping language development but there must be an innate beginning at which the processing starts. The nature/nurture debate here is whether genes or environment play the initial role in language acquisition. It appears that both have a significant contribution to a child's cognitive/language development, enabling infants to understand and produce their first words at the speed and with the efficiency as they do, and continuing research and investigation will help to establish which theory is the more convincing within the sphere of language development. ...read more.