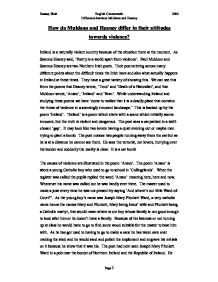 How do Muldoon and Heaney differ in their attitudes towards violence?

How do Muldoon and Heaney differ in their attitudes towards violence? Ireland is a naturally violent country because of the situation there at the moment. As Seamus Heaney said, 'Poetry is a world apart from violence'. Paul Muldoon and Seamus Heaney are two Northern Irish poets. Their poems bring across many different points about the difficult times the Irish have and also what actually happens in Ireland at these times. They have a great variety of showing this. We can see this from the poems that Heaney wrote, 'Trout' and 'Death of a Naturalist', and that Muldoon wrote, 'Anseo', 'Ireland' and 'Bran'. While understanding Ireland and studying these poems we have 'come to realise that it is a deadly place that contains the threat of violence in a seemingly innocent landscape.' This is backed up by the poem 'Ireland'. 'Ireland' is a poem which starts with a scene which initially seems innocent, but the truth is violent and dangerous. ...read more.

The poet had next seen Joseph Mary Plunkett Ward in a pub near the border of Northern Ireland and the Republic of Ireland. He was living in a secret camp 'fighting for Ireland', this being the IRA (Irish Republican Army). He had been promoted from Quartermaster, handler of weapons, to Commandant, the commander of several thousand men. The fact that he became Quartermaster refers back to his childhood days when he used to make the 'weapon' that he was to be beaten with. The most possible reason he joined the IRA is that he had been taught that the only way to pronounce yourself and show what you want is by violence. Other reasons could be that he wants to get rid of the people that torture other innocent citizens. The reactions to violence are shown in both 'Anseo' and 'Ireland'. Joseph Mary Plunkett Ward engraves his initials on the stick that he is to be beaten with. ...read more.

This causes a loss of innocence. It seems that Seamus Heaney has a fascination with violence. He uses phallic imagery in the poem 'Trout'. He thinks the trout is beautiful, it 'slips like butter', it moves with exciting power. Normal nature turns from innocent to guilty as the trout becomes a 'ramrodding p***s': 'never burnt out'. Heaney has a fascination with s****l power and freedom. I feel that Muldoon shows his attitude towards violence more clearly than Heaney does. I believe that he shows the different aspects of violence better than Heaney in different ways, he shows these aspects more directly. In Heaney's poems it takes time to work the inside meaning of the poem which I feel is a good way of putting across a point clearly but the two poems are very alike unlike Muldoon's poems which change subjects and describes different events. Heaney describes the glamorisation of violence whereas Muldoon attempts to understand the causes of violence and the regrets of innocence. Razaaq Shah English Coursework: 2002 Difference between Muldoon and Heaney Page 1 ...read more.