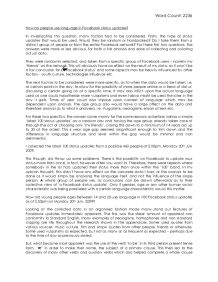 How do people use language in Facebook status updates?

How do people use language in Facebook status updates? In investigating this question, many factors had to be considered. Firstly, the type of status updates that would be used. Would they be random or handpicked? Do I take them from a distinct group of people or from the entire Facebook network? For these first two questions, the answers were more or less obvious, for both a fair analysis and ease of collecting and collating actual data. They were randomly selected, and taken from a specific group of Facebook users - namely my 'friends' on the network. This will obviously have an effect on the result of my data, as it won't be a fair conclusion for all Facebook status' and some aspects may be heavily influenced by other factors - youth culture, technologies influence etc. The next factors to be considered were more specific, as to when the data would be taken: i.e. at certain points in the day, to allow for the possibility of more people online or a trend of status' discussing a certain going on at a specific time. It may also inflict upon the actual language used as one could hypothesise more vulgarisms and even taboo might be used the later in the day it gets. ...read more.

They both capitalise the first word typed, probably through force of habit, which is (although not technically) correct for the second usage, the use of it in the first though was something I investigated further and found close to 16% of the people using their name as the sentence did the same thing, capitalising the first word typed, but using it at the first verb or adverbial in a 'subject-verb...' sentence. It was even more interesting when taking into account the amount overall who capitalised the first word, not just using the subject as the sentence. A significant 28% overall conformed to this. After annotating the research for the first time and looking for whole sentences which used their Facebook name as the subject of the sentence, I decided upon only using the first clause - with the subject's compulsory name in as, after this primary clause, the fact it uses the name as the subject has no effect on the rest of the sentence. For example: "Catherine Kyle Really hates surprises right now" Here, the whole sentence would be used to analyse, as it is just one clause, but here: "Jane Loraine-Blame has had a rate random weekend but its bin fun lol xx" Here, the sentence after to co-ordinating conjunction 'but' would be ignored; "but its bin fun lol xx" So, according to my data, 63% of statuses are used with the name as the subject of the sentence. ...read more.

"is" to give the audience, their network and friends a view of their immediate present and then can go on to tell either what they are feeling as of now, or what they are doing, as of now. This is not though, the conclusion of research to be done on Facebook Status Updates. There are wider audiences to be considered, different age groups, ethnic backgrounds, knowledge bases which can be researched. Other language features possible to look at: Pragmatics, the influence of technology on the language used and what may come hand in hand with that in our time only - youth culture, as we are the first REAL generation to make full use of social networking websites like this to what is their full potential now. The usage of non-standard English in the updates was another glaring subject which could be analysed hugely. Simple analysis of my own shows that 65% of the updates use clear non-standard English and technological influences, be it new acronyms, smileys or complete neologisms. This large figure doesn't even take into account features of spoken language which have transferred over, if so I can say the number would be incredibly close, if not dead on 100%. Deep analysis of this would I'm sure bring about some interesting and perhaps rather revealing conclusions. ?? ?? ?? ?? Word Count: 2236 ...read more.

This coursework gives good examples of a sufficiently detailed introduction and methodology as well as a detailed and complex analysis which includes plenty of lexical and syntactical terminology. This is done by giving a few examples for each aspect they ...

This coursework gives good examples of a sufficiently detailed introduction and methodology as well as a detailed and complex analysis which includes plenty of lexical and syntactical terminology. This is done by giving a few examples for each aspect they are focusing on e.g. name being the subject of status. Sufficient breadth of linguistic terminology is achieved despite the writer focusing heavily on the syntax of their data. This is important as examiners can only award marks for the features you highlight so itÃ¢â‚¬â„¢s worth mentioning as many as you can, providing it doesnÃ¢â‚¬â„¢t confuse the point youÃ¢â‚¬â„¢re trying to make. A lack of conclusion and evaluation is the major problem with this piece but it would not be fair to dismiss it entirely as it demonstrates good data-analysing techniques incorporating charts and comparisons and drawing examples from these by quoting percentages and possible reasons, vital for impressing A level examiners. However mentioning a few more theories or theorists would demonstrate understanding and an ability to link together various aspects of the curriculum. This would also be beneficial when writing the conclusion as you could link the findings back to a particular mentioned theory and therefore assess the validity of the results, approach the task as scientifically as possible for better grades. When writing an evaluation remember to pick up on any problems you may have mentioned earlier on and suggest possible improvements giving reasons why these changes would make your findings more reliable/easier to carry out etc. as this is what examiners are looking for.

A very well informed and explained methodology section covers many of the intricacies and practicalities of performing such an investigation in a reliable way, as well as highlighting areas where other variables could confound reliability. An evaluation would cover these in greater depth and should also offer improvements which is important for showing your understanding of the subject and of the scientific element of the investigation. The A level investigation coursework is much more scientific than anything you would have done in an English course previously. I would have preferred to see a short paragraph covering the reasoning behind the choice of investigation, demonstrating a genuine interest in the chosen area of linguistics. It is vital to be very specific in your methodology so that you can refer back to it when completing your evaluation/conclusion and the candidate could have improved on this, for example, by mentioning the exact time of day the status updates were collected at. However itÃ¢â‚¬â„¢s important to note the correct and proficient use of subject-specific terms e.g. neologisms as this gets you into the higher marking bands, especially when syntax is also mentioned.

spelling is correct but issues with grammar have made some sentences harder to read, especially with unnecessary repetition. Proofreading is vital to ensure that any submitted work is clear and as concise as possible.