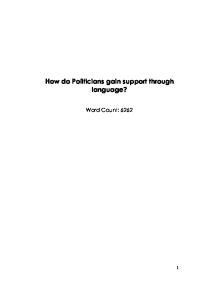 How do Politicians gain support through language? AQA English coursework

How do Politicians gain support through language? Word Count: 6262 INTRODUCTION Politics is concerned with power, and the language that politicians use reflects their craving for it. Through language politicians hope to make decisions that will influence other people's behaviour and even their values. Power can be gained in many ways, in a dictatorship by force, in a democracy through law, or often a much more successful technique; through the power of persuasion. This method is often found in political speeches, and is used to coerce people into embracing a politician's goals. Much background reading was done into politics and the English language, including "The Language of Politics" by Adrian Beard and George Orwell's "Politics and the English Language", in order to gain a deeper insight into this distinct style of language. "The Language of Politics" highlights the different stances that political parties may take e.g. left or right wing, and this is often reflected in the politician's speeches. Left wing parties such as Labour are often socialist or radical groups, and right wing parties, such as the Conservatives are often conservative or nationalist. Both types of party have very different values. Beard also points out some of the techniques that politicians use in speeches in order to be persuasive. For example: metaphors, contrastive pairs and tripartite structures. Orwell points out, in his essay, "...political language has to consist largely of euphemism, question-begging and sheer cloudy vagueness." He also stresses, "Political language... is designed to make lies sound truthful and murder respectable, and to give an appearance of solidity to pure wind." Orwell suggests a number of rules that politicians should (but do not) follow: 1. Never use a metaphor, simile or other figure of speech which you are used to seeing in print 2. Never use a long word where a short one will do 3. If it is possible to cut out a word, always cut it out 4. ...read more.

The three consecutive simple sentences; "Never done it before. Never debated it before. Never imagined it before." emphasise the great accomplishment a third term in government would be. The adverb "never" suggests that another party has not done it in the past and so connotes the greatness of the situation in which Labour find themselves in. The tripartite structure of declarative sentences: "Lucky to have been able to change our party from one of permanent opposition to one that can compete for government on equal terms. Lucky to be in a country as great as this serving a people as decent as the British people. Lucky to have a Cabinet of talented men and women I'm proud to call friends, as well as colleagues." Contains the relative subordinate clause "that can compete for government on equal terms," which suggests that they were once the underdogs and the verb "compete," suggests that they have fought for their right to govern. Through use and repetition of the qualitative adjective "lucky," a sense that Labour feels blessed to be a part of the British government is given, surely a compliment to the public. The noun phrase, "A cabinet of talented men and women" suggests that Labour is capable of a 3rd term as its members are skilled at their roles. The infinitive verb "to call," when used with the concrete noun "friends" implies that the party has humanity and can relate to the British public. This structure therefore gives the public an overall view of Labour's qualities that make them fit to govern. The minor sentence "Power, wealth and opportunity in the hands of the many, not the few." contains three abstract nouns "power," "wealth" and "opportunity" forming a tripartite structure. All imply the way of life that Labour wants for the public, and continues with their theme of equal opportunity as well as insinuating that he wishes to increase the strength of Britain. ...read more.

I learnt a lot about the language of politicians throughout this investigation and broadened my knowledge of the language features used within political speeches. However, as the speeches were very long, given the time constraint, I could only analyse the texts to a certain extent and so chose only the key linguistic features that I believed were most important. If I had more time I would look at further features of the speeches, but I do feel that a sufficiently in depth analysis has been made. If I were to improve my investigation I would analyse the positioning of certain devices in the text and how many of each are used throughout. This may have been useful in seeing how the rhetorical devices aided flow and cohesion, or acted to regulate the speech. I could have also looked at a smaller party such as, the British Nationalist Party (BNP). In doing this I could have compared the speech of the BNP leader to that of Tony Blair and perhaps established why he not such a popular candidate for government. If I were to perform a further investigation I would transcribe a speech from a spoken recording. In doing this I could not only look at linguistic features such as lexis and grammar but phonology and speech features. By investigating the intonation patterns used throughout the speech I could analyse the devices used in order to determine the effect they have. The fluency of the speech could also be looked at. Strategically placed pauses could be used for dramatic effect, whereas unorchestrated hesitancy could be perceived as uncertainty and weakness. I believe this would be useful and interesting for further research, after all, a speech is written to be read aloud. In addition, it may be interesting to compare election speeches from different times to see how time and context affects the language used. For example, I could study a speech given by Tony Blair, Margaret Thatcher and Winston Churchill to see how they differ. Overall I believe that my language investigation has been interesting and largely a success. ...read more.