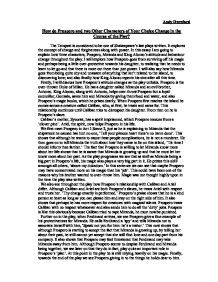 How do Prospero and two Other Characters of Your Choice Change in the Course of the Play?

Andy Durnford How do Prospero and two Other Characters of Your Choice Change in the Course of the Play? The Tempest is considered to be one of Shakespeare's last plays written. It explores the concept of change and forgiveness along with power. In this essay I am going to explain how three characters, Prospero, Miranda and King Alonso's attitude and behaviour change throughout the play. I will explore how Prospero goes from surviving off his magic and perhaps being a little over-protective towards his daughter, to realising that he needs to learn to let go and that there is more out there than just power. I will also say how Miranda goes from being quite shy and unaware of anything that isn't related to the island, to discovering love; and also finally how King Alonso repents his sins after all this time. Firstly, I will discuss how Prospero's attitude changes as the play unfolds. Prospero is the over-thrown Duke of Milan. He has a daughter called Miranda and an evil brother, Antonio. King Alonso, along with Antonio, helps over-throw Prospero but a loyal councillor, Gonzalo, saves him and Miranda by giving them food and water, and also Prospero's magic books, which he prizes dearly. ...read more.

He accepts that Miranda has fallen madly in love with Ferdinand and that he cannot stop her growing up, even with all his power. He finds that magic is not the answer to everything, 'I have given you hear a third of mine own life...now my charms are all o'erthrown and what strengths I have's my own.' Prospero also recognises that forgiveness is greater than vengeance. 'Sir, I invite your highness and your train to my poor cell.' All of these things show that Prospero in being in this island has learnt some key things in life and about himself. It also shows that being marooned there for all those years helped him grow into a better person. I will now explore how Miranda's character opens up throughout the play. Miranda is the son of Prospero and arrived on the island aged about three. She doesn't remember much about her previous life in Milan. At first, Miranda appears almost in Prospero's command, 'O my heart bleeds to think o'th'teen that I have turned you to.' As she knows nothing about her previous life and he is the only man she knows of, she looks up to him like a servant would to his master. It is clear that Miranda has utmost respect him. ...read more.

In the end King Alonso repents all his sins, 'Thou pardon me my wrongs,' by repenting his sins Alonso is showing us that he is a very mindful character and can accept that he has done wrong and is aware that he needs to take responsibility for his own actions. Throughout the whole play there is a great amount of change going on, whether it be Prospero giving up his magic or Caliban repenting his sins. I believe that this play is built with a moral behind it. At the end of The Tempest everybody is bought together and we find out how different everyone is as well as how they feel about each other truthfully. Although Prospero has been on the receiving end of so many wrong doings, he can still forgive them all, including his unrepentant brother, Antonio. Some of the characters: Gonzalo, Caliban and King Alonso ask for his forgiveness and repent their sins. Others: Sebastian and Antonio do not and still believe that he got all he deserved. This shows that they are in some ways ignorant and not as 'big' as those who asked for forgiveness, it takes a bigger man to own up to what he has done. ...read more.