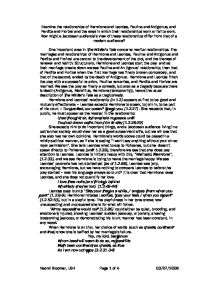 How do relationships succeed or fail in the Winter's Tale?

Their closeness is shown in Noble's 1992 production, where Antigonus hugs Paulina while she speaks to Leontes, and Paulina and Antigonus play fighting - they really do love each other. Antigonus allows Paulina her leeway, however, not because he is worn down, but more because he knows she knows what she is doing. There is still an element of allowance from Antigonus, i.e. he will let her run. When she will take the rein I let her run, But she'll not stumble. [2.3.51-52] Paulina subverts another stereotype; a servant-master relationship - Leontes is scared of Paulina, almost like a husband fearful of a dominating wife. I charged thee that she should not come about me; I knew she would. [2.3.43-44] Paulina has her own way because she has moral purpose. She does the right thing by her love of Hermione in defending her forcefully, which is why we see Paulina favourably. Also, we have the same idea as in King Lear of service versus servility. In King Lear, Kent and the fool both tell King Lear he is wrong, and Kent is banished for it, while the fool is not taken seriously because he is a mere jester. ...read more.

goes along with this. Perdita says that their affection is not overcome by their mind's shame of deception, perhaps implying that suffering strengthens us. In all three relationships, women suffer because of the negative qualities of men. Leontes is obviously the worst, but Antigonus thinks when he leaves the baby that Hermione might be actually guilty. Florizel uses deception to see Perdita in public but he does so because he wants to spend time with her and within her community, so as a modern audience we tend to forgive him. The women in the relationships are stronger in general. For a Jacobean audience, there would be key differences in how the relationships in the play are viewed to the reactions of a modern audience, but there would also be key similarities. As a modern audience, we know and understand previous views (and the context in which the play was first presented) and can hence incorporate these into our enjoyment of the play. The great messages and themes, therefore, are the same as they would have been 400 years ago. 1977 words - 42 title - 243 quotes 1692 total ?? ?? ?? ?? Naomi Bloomer, L6H Page 1 of 4 03/07/2008 ...read more.