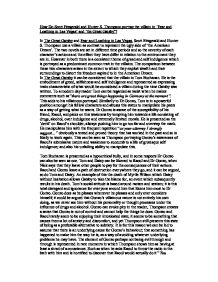 How Do Scott Fitzgerald and Hunter S. Thompson portray the villain in 'Fear and Loathing in Las Vegas' and 'the Great Gatsby'? In The Great Gatsby and Fear and Loathing in Las Vegas, Scott Fitzgerald and Hunter S. Thompson use a villain as contrast to represent the ugly side of 'the American Dream'. The two novels are set in different time periods and so the severity of each character's actions and the effect they have differ in relation to the environment they are in. However in both there is a consistent theme of greed and self indulgence which is portrayed as a predominant common trait in the villains. The comparison between these two characters arises in the extent to which they exploit wealth and their surroundings to distort the freedom aspired to in the American Dream. In The Great Gatsby it can be considered that the villain is Tom Buchanan. He is the embodiment of greed, selfishness and self indulgence and represented as expressing traits characteristic of what would be considered a villain during the time Gatsby was written. To a modern day reader Tom can be regarded as r****t when he makes comments such as "there are great things happening in Germany at the moment". This adds to his villainous portrayal. Similarly to Dr Gonzo, Tom is in a powerful position amongst his fellow characters and abuses this status to manipulate his peers as a way of getting what he wants. Dr Gonzo is aware of the susceptibility of his friend, Raoul, and picks on this weakness by tempting him towards a life consisting of drugs, alcohol, over indulgence and extremely limited morals. He is presented as the 'devil' on Raoul's shoulder, always pushing him to go too far and overstep the mark. He manipulates him with the frequent repetition "as your attorney I strongly suggest..." obviously a tested and proved theory that has worked in the past and so is likely to work again. ...read more.

If it is considered that Tom and Gonzo possess shared traits of greed and indulgence, then they are both examples of the undesirable effects this can have when exposed to a world that provokes and fuels these traits. However it is this that makes Tom possibly the more influential villain of two. Tom is extremely wealthy and powerful and therefore in a position which grants him the ability to do as he pleases and expect no one to object. Gonzo's actions, have less impact in a world where the people surrounding him have 'seen it all before'. It is not only characters that can be considered as villains so much as themes and ever present but never really visible elements to a novel. In Fear and Loathing it can be considered that the villain is represented through the law. The reckless lifestyle these two people lead is always over shadowed by the power and authority of the law, the one thing that seems to ground the spontaneous and erratic narrative we become accustomed to. The law acts as a constant barrier preventing Raoul and Gonzo from doing entirely as they please. This is similar to the prohibition enforced in Gatsby. Thompson reflects on the great San Francisco acid wave of the 1960s in what has become known as 'the wave speech'. "And that, I think, was the handle - that sense of inevitable victory over the forces of Old and Evil. Not in any mean or military sense; we didn't need that. Our energy would simply prevail. There was no point in fighting - on our side or theirs. We had all the momentum; we were riding the crest of a high and beautiful wave... So now less than five years later, you can go up on a steep hill in Las Vegas and look West, and with the right sort of eyes you can almost see the high-water mark - that place where the wave finally broke and rolled back" This has Thompson ...read more.

Tom is the obvious villain, hypocritical and cruel. But every character at at least one point commits a villainous act. For example; Daisy kills Myrtle Wilson, Myrtle has an affair with Tom and Wilson kills Gatsby. Fitzgerald has created a society driven almost insane by its own greed and selfishness. The characters have succumbed to the temptations of self indulgence and in doing so lost control. These people have been converted into villains by the lifestyle and culture which surrounds them. It is hard to distinguish whether they are villains of their own making or victims of circumstance, but have become selfish, reckless and careless, and refuse to take seriously what they have become. "Suppose you meet somebody just as careless as yourself." "I hope I never will." If a villain is considered to be someone who causes deliberate harm to others for his own pleasure or benefit, then both Gonzo and Tom may be considered as such. They are both portrayed as warped products of the American Dream. Gonzo is rarely in control and so can be seen as more of an accidental villain and perhaps just as much a victim. Tom's actions are driven by a conscious sense of greed; pre-meditated and even deliberately s******c. Tom and Gonzo are presented in different ways. The narrative of Fear and Loathing drags us along with it, whereas Gatsby's narrative is someone else's story, told through the eyes of another character. This allows a more critical and objective interpretation to be made of Tom, as it is easy to judge someone when looking at them from an outsider's perspective. Thompson involves us in the heart of the action and by instinct we make less harsh judgements of ourselves. I think Fitzgerald is more successful in portraying the traditional stereotype of a villain in Tom Buchanan; someone who deliberately commits evil deeds for selfish purposes. But I think Thompson portrays more of a modern day villain, someone driven by influences no longer under his control; subsequently turning him into a villain. For this reason, I think Tom is the true villain of the two. ...read more.

This is a thoughtful essay demonstrating good knowledge of both texts and some understanding of their contexts. There is obvious engagement with the novels which comes across well in the essay. At times, insightful analysis is offered. There are some points for improvement:
1) A wide range of ideas is discussed but the essay is not as well-structured as it could be. A clearer plan, highlighting different points that will be covered, would help to ensure that the essay progressed well, considering different aspects of both novels.
2) Ideally, a paragraph should open with a clear topic sentence, evidence from the novel, analysis, and in this case, contextual information.
3) There was not enough evidence used in this essay which meant there was not very much detailed analysis of language and authorial technique, which should be at the heart of an essay.
4) The title needs to clearly state if the essay will be comparative or not.
Overall, three stars ***