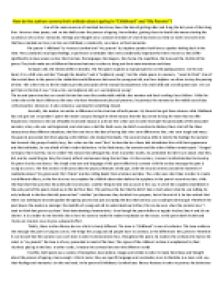 How do the authors convey their attitude about ageing in Childhood and My Parents?

﻿How do the authors convey their attitude about ageing in ?Childhood? and ?My Parents?? One of the main concerns of mankind has always been the idea of getting older and living the last years of their long lives. However time passes, and we inevitably enter the process of ageing. Nevertheless, getting closer to death also means starting the countdown of our lives: memories, feelings and thought are a constant reminder of what it has been our time on Earth. Several events that have marked our lives, such as our childhood, or maternity, now leave us fond memories. The poems "childhood" by Frances Cornford and "My parents" by Stephen spender both have a speaker looking back in the time. They constantly recall past feelings, experiences or attitudes that were considerably important for them. However, they differ significantly in many areas such as the structure, the language, the imagery, the rhyme, the repetition, the tone and the rhythm of the poem. They both make use of different literature features in other to bring out their main intentions and ideas. To begin with, the themes differ extensibly. The first poem explores a dual perspective on the ageing process. On the one hand, it is a child who watches "through the banister" and is "helplessly young", but the whole poem is a memory- "I used to think". ...read more.

On the contrary, Frances Cornford decided to develop his poem in only one Stanza. The simple structure and language of this poem effectively contrast with the serious message the poet is trying to convey. The first section vividly describes the physical features of old age, while the second centres around the moment of realisation about "My great-aunt Etty's friend" and her rolling beads from a broken necklace. The writer uses short lines in order to create two different effects; in the first it serves to complete the childish observation before the epiphany in the poem's second section, while the final short line provides the ambivalent conclusion. Another thing to take into account is the way in which the couplets established in the early part of the poem, break up in the last four lines. This portrays the fact that he didn't know much about what he was talking, he only believed in the idea that old persons had "wrinkles" just because they decided it on purpose, but at the end of it, he has noticed that there was nothing to be done against the ageing process but just accepting the idea that one day you would get old enough. Therefore the poet leaves the readers a message: the inability of young and old to understand each other; this can be seen when the narrator says "i used to think that grown-up chose" their deteriorating characteristics. ...read more.

The writer also uses words such as "grope' to describe and give the reader the image of this old woman?s' incapacity to move, and "they chose them to be grand" which indicates that the speaker was very young, since he thought stiff backs, wrinkles, and veined hands were "grand". Last but not least, the poet uses euphemisms as the narrator says "going away". This means that he is avoiding the concept of death, so as not to be interpreted as an aggressive word. On the other hand, Spender also makes use of different devices in order to emphasise the idea of a boy being bullied and the victim's response to the other boys. The writer uses words such as "threw, ran, climbed" to describe the full action of the rough boys, while the narrator's verbs are passive and weak- "feared, looked, pretending". He also uses similes such as "muscles like iron" so as to describe their physical presence, or "threw words like stones" to depict how rough he was treated by the rest. Another thing to take into account is the title, although it is also mention in the first line, we can get by it that the narrator was an overprotected boy. All in all, Spender and Cornford make great use of the literary devices, and could manage to express their ideas and concepts throughout the poems they wrote; both of them recall old feelings and thought which are portrayed all along the narration. ...read more.