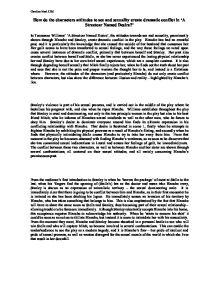 How do the characters attitudes to sex and sexuality create dramatic conflict in 'A Streetcar Named Desire?'

How do the characters attitudes to sex and sexuality create dramatic conflict in 'A Streetcar Named Desire?' In Tennessee Williams' 'A Streetcar Named Desire', the attitudes towards sex and sexuality, prominently shown through Blanche and Stanley, create dramatic conflict in the play. Blanche has had an eventful past, and it is particularly the knowledge that she caused the suicide of her husband that consumes her. Her guilt seems to have been transferred to sexual feelings, and the way these feelings are acted upon cause several instances of dramatic conflict, primarily that between herself and Stanley. Her past also creates conflict between herself and Stella, as she has never experienced the lasting physical relationship her and Stanley have due to her own brief sexual experiences, which are a complete contrast. It is also through degrading herself sexually that Mitch finally rejects her, when he finds out the truth about her past and sees that she is not the prim and proper woman the thought her to be, and instead is a flirtatious whore. However, the attitudes of the characters (and particularly Blanche) do not only create conflict between characters, but also show the difference between illusion and reality - highlighted by Blanche's lies. Stanley's violence is part of his sexual prowess, and is carried out in the middle of the play where he brutalises his pregnant wife, and also when he rapes Blanche. ...read more.

His anger is founded on his interpretation of the Napoleonic Code, 'according to which whatever belongs to my wife is also mine.' Blanche thinks that she is able to use flirting as an escape from the truth, and reality, but Stanley is not at all impressed and 'slams (the atomizer) down on the dresser.' He clearly likes his women to be straight forward, shown through his relationship with Stella, which is based primarily on their strong physical attraction. Another confrontation is shown during the poker night in scene three. Blanche one again flirts, but this time with Mitch when he passes through the bedroom on his way to the bathroom, which takes him away from Stanley's poker game. Blanche then turns the radio on which plays music with a 'sexy sound', not appropriate as she moves into the light and stretches. This provocative action is designed in coercion with putting the radio on to attraction the attention of the other poker players. This frustrates Stanley, as she appears to be invading his house and lifestyle, so he throws the radio out of the window and attacks Stella. Blanche defies Stanley by taking Stella to Eunice's apartment, but then Stanley answers this by taking Stella back into the apartment as he 'presses his face to her belly, curving with new maternity.' ...read more.

It is difficult to separate Blanche's apparent obsession with sex from her habitual flirtation, the stereotypical activity of a Southern belle, with all men. Regardless of this, she continues to commit acts, which cause her to be excluded from the community, and which eventually force her into a confrontational situation with Stanley. Throughout the play, Blanche's attitude to sex and sexuality creates tension between herself and Stanley resulting in conflict. Stanley uses Blanche's past to try to separate her from Stella and Mitch, but only succeeds in the latter. The inevitability of the rape is hinted at by earlier encounters, as the tension between Blanche and Stanley has always been sexual due to Blanche's constant flirting. She wears a 'pink silk brassiere', a sexual material, and a seductive 'dark and red satin wrapper' despite the fact she has never experienced the 'real passion' and 'enduring love' between Stella and Stanley and instead takes part in flings 'while the devil is in' her. She fails to understand their relationship, and this causes conflict between her and Stella, resulting in Stella not believing that Stanley raped Blanche - therefore sending her to the asylum. Stella and Stanley's relationship and attitudes to sexuality do the opposite, in that it resolves conflict, as they are bound by sexuality, and sex is their method of communicating. Caroline Neal 12M ...read more.