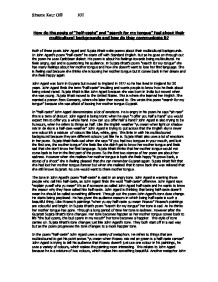 How do the poets of &quot;half-caste&quot; and &quot;search for my tongue&quot; feel about their multicultural backgrounds and how do they communicate it?

How do the poets of "half-caste" and "search for my tongue" feel about their multicultural backgrounds and how do they communicate it? Both of these poets John Agard and Sujata Bhatt write poems about their multicultural backgrounds. In John Agard's poem "half-caste" he starts off with Standard English. But as he goes on through out the poem he uses Caribbean dialect. His poem is about his feelings towards being multicultural. He feels angry, sad and is questioning his audience. In Sujata Bhatt's poem "search for my tongue" she has many feelings about her mother tongue and how she doesn't want to lose her first language. She is feeling sad because she thinks she is loosing her mother tongue but it comes back in her dream and she feels happy again. John Agard was born in Guyana but moved to England in 1977 so he has lived in England for 30 years. John Agard finds the term "half-caste" insulting and wants people to know how he feels about being mixed raced. Sujata Bhatt is like John Agard because she was born in India but moved when she was young. Sujata Bhatt moved to the United States. This is where she learned her English. ...read more.

This style of tone carries on. Sujata Bhatt's tone changes just like John Agard's tone. They both start off in a sad way but as the poem progresses the tone changes to a more happier tone. In the poem "half-caste" John Agard uses a variety of metaphors. He refers to things that are multicoloured to get his point across "yu mean when Picasso mix red an green is a half-caste canvas" John Agard is trying to tell his audience that Picasso doesn't just use one colour in his paintings, he uses a variety of colours, which makes the painting more interesting. This relates to John Agard because he is a mixture of two colours, which makes him something beautiful. Another metaphor John Agard uses is "yu mean Tchaikovsky sit down at da piano and mix black key wid white" Again John Agard is saying that mixing two colours is a wonderful thing. John Agard repeats "half" 17 times. He is telling the audience that being half-caste doesn't mean that he is half a person. However he refers him self as half when he says "I dream half a dream". No one can dream half a dream. He is being ironic. ...read more.

The plant which was her mother tongue is growing back. John Agard and Sujata Bhatt feel very strongly about there multicultural backgrounds. If someone tries to insult John Agard about being "half-caste" he would be very questioning. Like in the poem, its like someone had called him half-caste and John Agard takes it the wrong way and thinks he is half a person. I think that John Agard makes his point very clearly in his poem about how he feels about being multicultural. Sujata Bhatt feels sad that she is loosing her mother tongue and wouldn't want anything or anyone to take that away from her. When she feels like she is loosing that language she makes her point how hard it is speaking two different languages. But when the Gujarati comes back I think she still finds it difficult to learn both languages. Sujata Bhatt helps you to feel that confusion when she puts some Gujarati in her poem. Out of those two poems "half-caste" and "search for my tongue" I found "search for my tongue" a better poem. Sujata Bhatt helps you understand how she feels and because I know how hard it is to speak different languages, that poem interested me more. ?? ?? ?? ?? Simone Kaur Gill 10T ...read more.