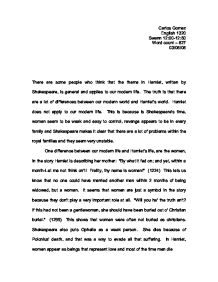 How do the themes of Hamlet relate to modern life?

Carlos Gomez English 1320 Swann 12:00-12:50 Word count - 827 03/06/06 There are some people who think that the theme in Hamlet, written by Shakespeare, is general and applies to our modern life. The truth is that there are a lot of differences between our modern world and Hamlet's world. Hamlet does not apply to our modern life. This is because is Shakespeare's time, women seem to be weak and easy to control, revenge appears to be in every family and Shakespeare makes it clear that there are a lot of problems within the royal families and they seem very unstable. One difference between our modern life and Hamlet's life, are the women, In the story Hamlet is describing her mother: "By what it fed on; and yet, within a month-Let me not think on't! Frailty, thy name is woman!" (1224) This lets us know that no one could have married another man within 2 months of being widowed, but a woman. ...read more.

It is rare that somebody kills their father or uncle. In Hamlet, Laertes, Hamlet's father's ghost, Ophelia, and Hamlet himself wants to avenge a loved one. "I am satisfied in nature, whose motive in this case should stir me most to my revenge." (1311) This is said by Laertes when he fights with Hamlet. Both Laertes and Hamlet want to avenge their father. Ophelia also feels the necesity to avenge her father. It does not matter to Ophelia that Hamlet is a very close friend, because she feels she has to avenge her father. In the confusion of what to do, she decides death is a better choice. Everyone who wanted to avenge a loved one died. When someone dies is like erasing all those sins comitted and forgiving that person. Killing a person is like erasing the victim's sins and putting them on the killer. In Hamlet, every single person who wanted to get revenge died and, in addition of getting their revenge, they also got their sins taken away. ...read more.

Hamlet is blinded by revenge and he does not care what happens to his people. He only cares, and focuses on revenge. Today we see weakness as a weakness and nobody can change that. The important thing in our government is that it has to have no weaknesses at all. For this reason Hamlet does not apply to our modern life. In conclusion, Hamlet does not relate to our modern life for many reasons. The truth is that Hamlet's theme is very different from ours. Revenge is not something common in our modern life. Revenge is an important thing in Hamlet. Women appear as symbols that represent weakness. In our modern world, women are as good as men and they are not weak at all. With att these weaknesses, the whole kingdom appears to be weak. In the other hand we, in our modern life, does not accept weaknesses in anything. We see weakness as a bad thing. Hamlet may represent or apply to Shakespeare's time, but now Hamlet seems life a good story with a lot of themes and symbols but that is it. ...read more.