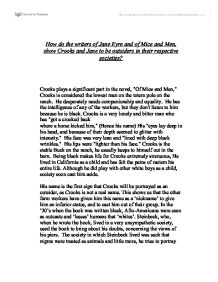 How do the writers of Jane Eyre and of Mice and Men, show Crooks and Jane to be outsiders in their respective societies?

How do the writers of Jane Eyre and of Mice and Men, show Crooks and Jane to be outsiders in their respective societies? Crooks plays a significant part in the novel, "Of Mice and Men," Crooks is considered the lowest man on the totem pole on the ranch. He desperately needs companionship and equality. He has the intelligence of any of the workers, but they don't listen to him because he is black. Crooks is a very lonely and bitter man who has "got a crooked back where a horse kicked him," (Hence his name) His "eyes lay deep in his head, and because of their depth seemed to glitter with intensity." His face was very lean and "lined with deep black wrinkles." His lips were "lighter than his face." Crooks is the stable Buck on the ranch, he usually keeps to himself out in the barn. Being black makes life for Crooks extremely strenuous, He lived in California as a child and has felt the pains of r****m his entire life. Although he did play with other white boys as a child, society soon cast him aside. ...read more.

Crooks's quarters are smelly and dirty, again reinforcing his inferiority to the others. In his stable he also has a collection of commodities that would not normally be associated with a ranch laborer, in the plot it is indicated that he intends to stay on the farm due to his crooked back, and not move to a new ranch when work there is completed as George and Lennie do. This is a method used by Steinbeck to isolate Crooks from the other workers. As is the way in witch he is given a different job than George and Lennie, as a disabled worker he can only complete menial tasks such as looking after the horses, degrading his usefulness and thus pushing him away even further. Although Jane Eyre is as much an outsider in her society as Crooks is in his, they are in completely different circumstances, but as with of mice and Men Jane Eyre is treated as an inferior person, but for different reasons. Jane was orphaned as a young girl and as such was sent off to live with her aunt at Gateshead Hall, where in her own words, "was at a discord at Gateshead hall: I was like nobody there; I had nothing in harmony with Mrs. ...read more.

Jane who comes from a fairly habitual background, and being female has to suffer the same stigmata that her author did, this pushes her to the edge of her social order. The way that Jane has changed from a bleak Landscape to the relative comfort of an upper class mansion, focus's her isolation when she looks back on her past as she looks out to the desolate past that is the frosty garden. Also the Language that Bronte gives Jane to use such as "What does Bessie say I have done?" and "'what do you want, Mr. Reed,' I said with awkward defiance," Is very composite for a young girl. It is also very defiant to speak to those that have taken her in such a manner, constructing a feeling of seclusion around her yet again, reinforced by her preferring to read alone in the study behind the curtain as she looks out to her past, and future, bleakness. Both Bronte and Steinbeck use the stigmas of their time to great effect in the respective novel to create the desired isolation of their characters. What they have in common is their desire to break these stigmata, Steinbeck the cruelty of r****m in the southern states and Bronte the constraints of sexism in the upper echelons of society. ...read more.