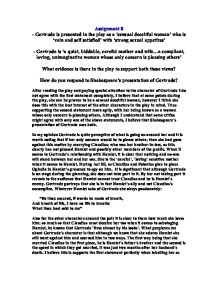 How do you respond to Shakespeares presentation of Gertrude?

Assignment 8 - Gertrude is presented in the play as a 'sensual deceitful woman' who is 'vain and self satisfied' with 'strong s****l appetites' - Gertrude is 'a quiet, biddable, careful mother and wife...a compliant, loving, unimaginative woman whose only concern is pleasing others' What evidence is there in the play to support both these views? How do you respond to Shakespeare's presentation of Gertrude? After reading the play and paying special attention to the character of Gertrude I do not agree with the first statement completely, I believe that at some points during the play, she can be proven to be a sensual deceitful woman, however I think she does this with the best interest of the other characters in the play in mind. Thus supporting the second statement more aptly, with her being known as a woman whose only concern is pleasing others. Although I understand that some critics might agree with only one of the above statements, I believe that Shakespeare's presentation of Gertrude uses both. In my opinion Gertrude is quite perceptive of what is going on around her and it is worth noting that if her only concern would be to please others; then she had gone against this motive by marrying Claudius; who was her brother-in-law, as this clearly has not pleased Hamlet and possibly other members of the public. ...read more.

In Act 4, Scene 5, alone for the first time in the play, Gertrude describes her soul as 'sick' with sin and apprehension. Gertrude knows what she has done is wrong and it seems that her conscience has kicked in causing her the apprehension. She is obviously very upset with herself what she has done (marrying Claudius) and perhaps she is frustrated that she had not known that her previous husband was murdered. However she cannot be vain and self satisfied as the first statement indicates because she is sick to the soul with her actions. I perceive Gertrude to be quiet and careful because she only states her true feelings and worries in asides, where the only people that can hear her are the audience. The other characters in the play may not know what Gertrude is really feeling and this could be because she wants it to be that way, she could want to be seen as in control and strong when really she is not. Hamlet and Gertrude clearly have good relationship, even though Gertrude betrayed him and married Claudius. Hamlet still doesn't think of her with the same hate as he does Claudius. Even Old Hamlet's ghost doesn't think badly of Gertrude he tells Hamlet to remember his 'purpose' when confronting Gertrude, his purpose is revenge. ...read more.

At some points during the play she is a 'sensual deceitful woman' who is 'vain and self satisfied' this is supported by her decision to marry Claudius even though it could cause uproar. However I do strongly believe that part of her character is her concern to 'only please others', she pleases Claudius at the beginning of the play by supporting him when making decisions and agreeing to spy on Hamlet. However when Hamlet reveals to her the truth about his father's death, her only concern from that point is on is to please Hamlet. Gertrude is a complex character often keeping her true feelings to herself and only appearing weak when she is speaking in asides. Supporting my theory that she likes to appear in control when around the other characters. At the end of the play she drinks the goblet that has the poison in it, in some performances it is made to appear that she knows the poison is in the drink and she drinks it anyway to save Hamlet. I believe that Gertrude's sole concern throughout the play is the welfare of Hamlet and some critics have said that their relationship has some Freudian characteristics but when it comes to choosing what statement I think best suits Gertrude, I think her character lies firmly in-between both. ...read more.