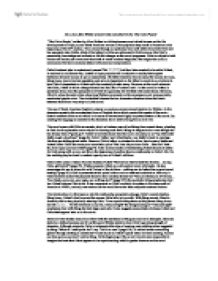 How does Alice Walker present Celie and Albert in the 'The Color Purple' "The Color Purple" written by Alice Walker is a bildunjiroman novel which focuses on the life developments of Celie, a poor Black American woman in the prejudice deep south of America in the beginning of the 20th century. This is done through an epistolary form with letters from both Celie and her separated sister Nettie. Most of the letters by Celie are addressed to God however like Celie's personality, knowledge and outlook on life this changes as the novel progresses. Celie is subject to both r****m and sexism yet overcomes them both to reach eventual happiness. She begins the novel in enslavement but she eventually attains fulfilment and independence. Celie's husband who is mysteriously named "Mr ____", but then later revealed to be called Albert, is enslaved in a different way. Instead of open prejudice he is subject to a society that expects barbarism towards woman to prove masculinity. His father disallows him to marry the woman he loves, Shug Avery, due to her bad reputation and as he is dependant on his father he must do so, similarly to how Celie is dependant on Albert until she eventually breaks away. However as the novel advances like Celie, Albert is able to change himself and feel like a "natural man". As the novel is written in epistolary from, from the perspective of Celie it is generally her life that is the main theme. ...read more.

He say... Your black, your pore, your ugly, you nothing at all" (page 187) the asyndetic listing emphasises how low Albert believes Celie to be. It also comments on Celie's unfairly low status in the deep south of America in 1930's, not only was r****m rife she would have also been subject to extreme sexism. The introduction of a third person into the relationship completely changes Celie's unjust situation. Shug Avery, Albert's first love and the woman Celie falls in love with. With Shug around Albert is forced by her to stop physically abusing Celie. "I see myself sitting there quilting tween Shug Avery and Mr____... For the first time in my life, I feel just right" the foregrounding of "I feel just right" emphasises how with Shug she feels happy and safe. It also suggests reconciliation between Albert and Celie that happens later on in the novel. However Celie breaks away from Albert with the assistance of Shug and moves to Memphis. Here she starts her clothes business and it is at this point Walker starts to show Celie's growing strength of character. Although originally Celie is indignant at the idea of wearing male clothing when suggested by Shug "What do I need pants for? I say. I ain't no man" (page 131). In which issues surrounding gender through clothing is mentioned "I used to put on Albert's pants when we were courting. ...read more.

The whole earth. The stars. But look at you. When Shug left, happiness desert" (page 235). It is not until the end of the novel when both Albert and Celie are able to accept and manage their love of Shug that they can finally be content. Celie comments "if she (Shug) come, I be happy. If she don't, I be content" (page 257). However Albert faces rejection one more time when he asks Celie to marry him not just in body but in spirit also. The issue of gender roles is clearly brought up by Walker through the relationship of Albert and Celie. He takes on the role of the dominant and violent husband, who can tell his wife what to do. However he does not work for her, or provide for her. When Celie leaves Albert she is strong enough to look after herself, make her own money and ends up inheriting her own house. When the pair are able to be friends, they sit and sew on Celie's porch and reminisce about the past. Through sewing together they show their unity and Albert adopts and enjoys a typical female past time, suggesting the idea of no gender differences between them. "Well, I say, we all have to start somewhere if us want to do better, and our own self is what us have to hand" this statement made by Celie to Albert really emphasises the changes that the two of them go thorough, both Celie and Albert went through similar problems with loss, unrequited love and domineering fathers. ...read more.