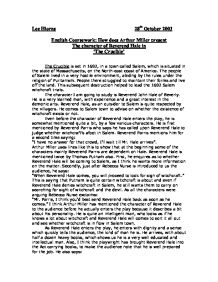 How does Arthur Miller present The character of Reverend Hale in 'The Crucible'.

Lee Hiorns 28th October 2003 English Coursework: How does Arthur Miller present The character of Reverend Hale in 'The Crucible' The Crucible is set in 1692, in a town called Salem, which is situated in the state of Massachusetts, on the North-east coast of America. The people of Salem lived in a very hostile environment, abiding by the rules under the religion of Puritanism. People there struggled to maintain their forms and live off the land. This subsequent destruction helped to lead the 1692 Salem witchcraft trials. The character I am going to study is Reverend John Hale of Beverly. He is a very learned man, with experience and a great interest in the demonic arts. Reverend Hale, as an outsider to Salem is quite respected by the villagers. He comes to Salem town to advise on whether the existence of witchcraft exists or not. Even before the character of Reverend Hale enters the play, he is somewhat mentioned quite a bit, by a few various characters. He is first mentioned by Reverend Parris who says he has called upon Reverend Hale to judge whether witchcraft's afoot in Salem. Reverend Parris mentions him for a second time saying: "I have no answer for that crowd, I'll wait till Mr. Hale arrives". Arthur Miller uses lines like this to show that at the beginning some of the characters mainly Reverend Parris are dependent on Hale. Reverend Hale is mentioned twice by Thomas Putnam also. First, he enquires as to whether Reverend Hale will be coming to Salem, as I think he wants more information on the matter. ...read more.

I think the playwright has put this in to point out that he is having his doubts about the court. I think this revelation makes the audience think that for a man of his background and beliefs, to act without 'authority' indicates that his faith in the justice of the court proceedings has been severely shaken. Demonstrating Reverend Hale's private integrity, he carries out his personal investigation of the Proctors', where their house is free from the hysteria that surrounds the girls and the courts. Arthur Miller deliberately uses irony, when Reverend Hale questions John and Elizabeth on their knowledge of the Ten Commandments. John manages to say all but one, 'thou shall not commit adultery.' I think it's quite clear that Reverend Hale knew and was quite confident that Elizabeth would remember all of the commandments, but he suspects that John may not remember them as much as his wife. But, just as Reverend Hale was leaving the Proctors', Elizabeth forced John to tell the Reverend about his conversation with Abigail. I think Arthur Miller, includes this because he wants us to see yet another side to Reverend Hale. As he had wondered why John had not told him about this important piece of information earlier and he feels somewhat deceived. Reverend Hale then reassured himself, that what Proctor is saying: "It had naught to do with witchcraft." It can not be true, as he examined Tituba himself and she has confessed to have dealings with the devil. Giles Corey comes with news that his wife has been arrested. ...read more.

He has severed his connections with the court and is determined to help the innocent. In trying to do so, he is forced to counsel men to lie, to confess to crimes of which they are innocent. Reverend Hale tries hard and pleads with Elizabeth to persuade her husband John, to lie in order to spare his life. He appears to have lost sight of his religious duty to save souls, not bodies. He misjudges John when he condemns his decision as stemming from his pride or vanity. Hale says to Elizabeth: "I come of my own, Goody Proctor. I would save your husband's life, for if he is taken I count myself his murderer." In a sense, perhaps the audience could think Reverend Hale wants the confessions for selfish reasons, so he no longer has blood on his conscience. In this respect, he compares quite compactly with Reverend Parris. In conclusion, I chose Reverend Hale to study in 'The Crucible' because I thought he was the most interesting and unique character. My main fascination about him was the large transformation of his character throughout the play. In Act 1, Hale entered Salem with dignity and the knowledge that he was going to see whether there was any witchcraft about in Salem, and to force out the devil. But in Act 4, we see a completely different Reverend Hale. He is still mentally very strong, but is losing his battle against the court to stop the executions from taking place. Compared to the other characters, Reverend Hale has so much depth and character to him. Even, though he doesn't play a particular huge part in the play, he is probably the most interesting. ...read more.