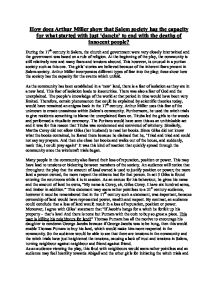 How does Arthur Miller show that Salem society has the capacity for what started with just 'dancin' to end with the deaths of innocent people?

How does Arthur Miller show that Salem society has the capacity for what started with just 'dancin' to end with the deaths of innocent people? During the 17th century in Salem, the church and government were very closely intertwined and the government was based on a rule of religion. At the beginning of the play, the community is still relatively new and many fears and tensions abound. This however, is unusual in a puritan society such as this one. The girls' stories are believed because of the inherent fears present in Salem society. Arthur Miller incorporates different types of fear into the play; these show how the society has the capacity for the events which unfold. As the community has been established in a 'new' land, there is a fear of isolation as they are in a new land. This fear of isolation leads to insecurities. There was also a fear of God and the unexplained. The people's knowledge of the world at that period in time would have been very limited. Therefore, certain phenomenon that could be explained by scientific theories today, would have remained an enigma back in the 17th century. Arthur Miller uses this fear of the unknown to create uneasiness within Salem's community. Furthermore, he used the witch trials to give residents something to blame the unexplained fears on. Tituba led the girls to the woods and performed a ritualistic ceremony. The Puritans would have seen this as an unthinkable act and it was for this reason that Tituba was condemned and convicted of witchery. Similarly, Martha Corey did not allow Giles (her husband) to read her books. Since Giles did not know what the books contained, he feared them because he claimed that he, 'Tried and tried and could not say my prayers. And then she close her books and walks out of the house, and suddenly, mark this, I could pray again!' ...read more.

he asks again "Then you tell me that you sat in my court, callously lying, when you knew that people would hange by your evidenc? Answer me!" "How were you instructed in your life?" All of these questions are shot at Mary Warren one after the other until, eventually she breaks down and accuse Procter of witchcraft. Towards the end of the play the audience will notice that reverend Hale is beginning to doubt Danforth's judgement and he makes a very important observation, "Is every defense an attack upon the court?" If anyone tries to defend himself or herself in court, then they would be accused of disturbing the court. This is an example of the corrupt court system in Salem. Hale also states that the community of Salem fears the government and it's courts, "We cannot blink it more. There is a prodigious fear of this court in the country-" Danforth refuses to believe Hale's advice and believes that "There is a moving plot to topple Christ in the country!" He also states that "No uncorrupted man may fear this court." This is ironic, as Giles is uncorrupted. Nevertheless, he was held in contempt and executed. Another example of dramatic irony present in the play is when Danforth asks Giles who gave him the information "If you informant tells the truth let him come here openly like a decent man. But if he hide in anonymity I must know why." The last part of that sentence "I must know why", is important as it is because of Danforth that Giles will not reveal his informant's name. Towards the end of the play, Hale is shown to be striving with his soul because he does not believe in Danforth's judgement. "Excellency, I have signed seventy-two death warrants; I am a minister of the Lord, and I dare not take a life without there be a proof so immaculate no slightest qualm of conscience may doubt it." ...read more.

"Let either of you breathe a word, or the edge of a word, about the other things, and I will come to you in the black of some terrible night and I will bring a pointy reckoning that will shudder you." Moreover, it is very noticeable that one of the plays biggest conflicts involves Abigail Williams. Another conflict was between John Procter and himself. After being accused of witchcraft John was sent to prison. He had a choice of saving his life by confessing or denying the charges and being executed. Battling with himself, John tried to figure out what the right decision would be. He then decided "I want my life...I will have my life." By confessing, John thought that he had helped his wife and children, by keeping his name and the good reputation of the family. It was only then that Proctor was asked to sign a statement of his confession that was to be pinned on the church door for all to see. For John Proctor, this was too much and he could not bear to sign his name as the church had already taken away his pride, morals and his honor. Just like Rebecca Nurse and Martha Corey, John stood up to the government and the church and died for the principles that he believed in. Acts such as these also led to the deaths of innocent people, because people who did not confess were presumed guilty (despite the fact that they were not) and executed. In conclusion, there were numerous factors that contributed to the deaths of innocent people in Salem. Varying different types of fear bought about insecurities in the community, which created tensions and conflicts. These tensions and conflicts were some of the motivating factors, which caused the people of the community to blame one another for different crimes and resulted in a complete lack of trust in the community. All of this contributed to the persecution and deaths of innocent people and a community which was once, so close, became fragmented. Arman Motiwalla 10PR ...read more.