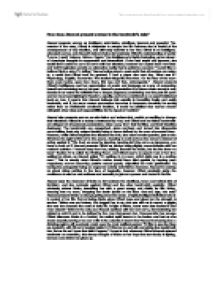 How Does Atwood present women in the Handmaid's Tale?

How does Atwood present women in the handmaid's tale? Atwood presents women as intelligent, submissive, rebellious, ignorant and powerful. The narrator of the story, Offred is desperate to escape her life however she is fearful of the consequences of any rebellion, and ultimately submits to her fate. Offred is an intelligent, educated woman, and Atwood's lexical choice demonstrates Offred's understanding of words: "Larynx. I spell. Valance. Quince. Zygote." Her intelligence is highly frustrating, as her stream of conscious thoughts is suppressed and internalised. If she was stupid and ignorant, she would find it easier to come to terms with her situation, however her crystal clear memories and vivid imagination provide an alternative reality that is painful to conceive: "I would like to believe this is a story I'm telling." Atwood writes about a past world that all readers can relate to, a world that Offred took for granted: "I had a paper due next day. What was it? Psychology, English, Economics. We studied things like that then. On the floor of the room there were books, open face down, this way and that, extravagantly." ...read more.

In light of Moira, Aunts were less fearsome and more absurd." Moira is the only one Atwood ascribes with her real name, demonstrating her refusal to submit and to be defined by the men that govern her. However after her escape Offred discovers Moira in a brothel, her radical spirit seems to be broken and lost as she chose s******y serving men over a life in the colonies. It seems that Atwood is showing how a dictating regime will eventually crush even the most resilient person: "I'd like to say she blew up Jezebel's, with 50 commanders inside it. I'd like her to end with something that would befit her. But as far as I know that didn't happen." It seems that whenever Offred showed outward weakness or cowardice, she always thought of Moira as her hope that somebody is fighting, but now even Moira has given up. However Offred herself does occasionally show signs of rebellion, such as her relationships with Ofglen and Nick. However her feelings of closeness to Nick lead her to believe that her situation is bearable, and she stops talking to Ofglen about the Mayday movement, therefore continuing to give up her freedom and remain submissive. ...read more.

Atwood is demonstrating a fundamental aspect of a totalitarian regime: that knowledge is power. She is warning us that if we do not seek knowledge we will remain the proletariat; controlled by the powerful. Aunt Lydia holds great significance in Offred's life, her influence and control clearly evident whenever Offred is faced with an ethical decision: "I know better than to say Yes. Modesty is invisibility, said Aunt Lydia." Offred's constant recollections demonstrate how Aunt Lydia repeated these mantras until they were embedded into the Handmaid's conscience. Offred wholeheartedly resents Aunt Lydia, and Atwood uses her cruel, phrases to demonstrate to the reader the profound hypocrisy of the regime: "We want you to be valued Girls. She is rich in pauses, which she savours in her mouth. Think of yourselves as pearls." Atwood uses Aunt Lydia as a perpetrator of dystopian society- where how things are thought to be, and how things actually are, are vastly and immeasurably disconnected. However Aunt Lydia's denial and power create a character as misogynistic as the men that rule Gilead, showing that if woman continue to judge, control and subjugate each other, they will never join together and be powerful enough to put an end to the regime. ...read more.

This is very good material indeed, demonstrating a high level control of lexis and structure. Points are well made, with skillful and apt support from textual references. Insight into the roles of the various women characters in the novel is penetrating and clearly expressed.

The essay falls down firstly by not having a clearly-expressed introduction and thesis, therefore making it hard for the reader to judge the essay writer's achievement. Secondly, there is no summary or conclusion at the end, which would serve to show how the claims made in the introduction have been supported by analysis. With these changes, the essay could attain 5 stars.