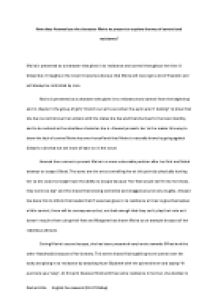 How does Atwood use the character Moira to present or explore themes of control and resistance?

﻿How does Atwood use the character Moira to present or explore themes of control and resistance? Moira is presented as a character that gives in to resistance and control throughout her time in Gilead but, throughout the novel it becomes obvious that Moira will never get a lot of freedom and will always be controlled by men. Moira is presented as a character who gives in to resistance and control from the beginning and in chapter 1 the group of girls ?stretch our arms out when the aunts aren?t looking? to show that she has no control over her actions with the status she has and that she lives for her own identity, and to be noticed as the rebellious character she is. Atwood presents her to the reader this way to show the lack of control Moira has over herself and that Moira is naturally brave by going against Gilead?s rules that we see more of later on in the novel. Atwood then comes to present Moira in a more vulnerable position after her first and failed attempt to escape Gilead. ...read more.

The last time Moira is shown, she is presented as a failure because we see that she no longer craved for the excitement and feeling of being free from men and this changes our perspective of her. Offred says she?s ?dressed absurdly? to show that the person she once looked up to has now faded and she is no longer seen as her heroic and rebellious friend that she knows so well. This shows that Moira?s character that the reader comes to love has gone and that Offred sees her as a stranger now and not the friend she once had. Atwood has presented Moira this way to show that there is no real way of escaping for women and they will always be controlled by men and put into places such as Gilead and jezebels the play their part in society. Going back, Moira shows a rebellious attitude as soon as she goes to Gilead by secretly meeting Offred in the bathroom and talking about how she?s going to escape. She does this when she says ?ill fake sick. ...read more.

This shows how women slowly stared to lose control over their lives but, people like Moira don?t let it get them down which is shown when she says ?she was not stunned the way I was?. This explains that Moira doesn?t let the power of men take control over her thoughts and she doesn?t change who she is because of the amount that she is able to do. This shows Moira has no resistance and shares her thoughts with Offred so she can escape easier. Moira is shown in this memory to show that some things have changed but, some things have stayed the same such as Moira?s character and that?s what makes Offred look up to her as her brave friends throughout most of the book. In conclusion, Atwood has used the character Moira to show resistance and her lack of power in Gilead. Moira is a person who gives in to resistance and is seen very heroic because she went against the rules and took control over herself however, she is also shown as a symbol in jezebels to show that there is no real escape from men and they will always be controlled by the men surrounding them. Rachel Little English Coursework (Ms O?Malley) ...read more.