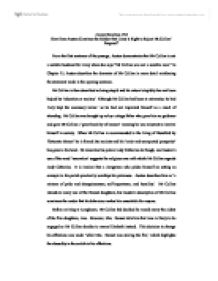 How does Austen convince the reader that Lizzy is right to reject Mr.Collins' proposal?

Jimmy Hamilton VM How Does Austen Convince the Reader that Lizzy is Right to Reject Mr.Collins' Proposal? From the first sentence of the passage, Austen demonstrates that Mr Collins is not a suitable husband for Lizzy when she says "Mr Collins was not a sensible man." In Chapter 15, Austen describes the character of Mr Collins in more detail reinforcing the statement made in the opening sentence. Mr Collins is then described as being stupid and his natural stupidity has not been helped by 'education or society.' Although Mr Collins had been to university, he had 'only kept the necessary terms.' so he had not improved himself as a result of attending. Mr Collins was brought up as by a stingy father who gave him no guidance and gave Mr Collins a 'great humility of manner' meaning he was reluctant to involve himself in society. When Mr Collins is recommended to the living of Hunsford by 'fortunate chance' he is forced into society and his 'early and unexpected prosperity' has gone to his head. He venerates his patron Lady Catherine de Bough, and Austen's use of the word 'veneration' suggests the religious awe with which Mr Collins regards Lady Catherine. It is ironical that a clergyman who prides himself on setting an example to his parish practically worships his patroness. ...read more.

Mr Collins explains to Lizzy how Lady Catherine will enjoy her 'wit and vivacity,' yet also says how Lady Catherine's high social rank demands silence, so it is a mystery how Elizabeth will be able to demonstrate 'wit and vivacity' when she is required to remain silent! It is evident from Mr Collins's attitude that he views Lady Catherine as being more important than his intended wife, but he further compounds his errors by telling Lizzy there are many 'amiable young women' in his neighbourhood. He also believes the marriage is right as a reconciliation because Mr Bennet's estate is entailed away form the family line to Mr Collins. So far, the reader has not seen a motive of love at any point in this proposal, Mr Collins has talked of pleasing himself and his patron. However, from chapter 15, the reader can see that there is no depth to Mr Collins's affections; he had simply resolved to choose a wife, almost for the sake of having one. Mr Collins, however, assures Lizzy of the 'violence' of his affection. He also claims that at as soon as he entered the Longbourn house he had 'singled out' Lizzy as the companion of his future life. The reader knows this to be untrue as Mr Collins only chose Lizzy when he was told Jane was likely to be engaged. ...read more.

These were two of the qualities Lady Catherine instructed Mr Collins to look for in a wife. Mr Collins continues to persist and he outlines the reasons why he is convinced Lizzy secretly loves him. These include 'my situation in life, my connections with the family of de Bough'. He further insults Lizzy saying she might not get another chance of marriage largely because her 'portion is so small' meaning her lack of wealth will ruin her chance of marriage and he is probably the only man who will accept her. He still refuses to accept Lizzy's refusal, and Lizzy leaves the room to appeal to her father 'whose negative might be uttered in such a manner as must be decisive.' Austen does not make the reader feel sorry for Mr Collins, but portrays him as a totally unsuitable husband for Lizzy. The initial description of Mr Collins in chapter 15 tells the reader what Mr Collins is like, and Austen's view of him as 'not a sensible man' is totally accurate. In chapter 19, we see Mr Collins's stupidity during his proposal to Lizzy, and it is obvious Mr Collins does not know how to behave, nether does he have any understanding of people's feelings. It is Austen's description and portrayal of Mr Collins that convinces the reader that Lizzy is right to reject Mr Collins and that she deserves a much better husband. ...read more.