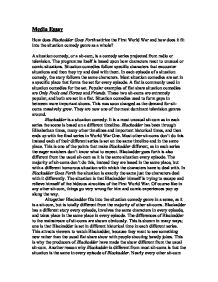 How does Blackadder Goes Forth satirize the First World War and how does it fit into the situation comedy genre as a whole?

Media Essay How does Blackadder Goes Forth satirize the First World War and how does it fit into the situation comedy genre as a whole? A situation comedy, or a sit-com, is a comedy series projected from radio or television. The programme itself is based upon how characters react to unusual or comic situations. Situation comedies follow specific characters that encounter situations and then they try and deal with them. In each episode of a situation comedy, the story follows the same characters. Most situation comedies are set in a specific place that forms the set for every episode. A flat is commonly used in situation comedies for the set. Popular examples of flat share situation comedies are Only Fools and Horses and Friends. These two sit-coms are extremely popular, and both are set in a flat. Situation comedies used to form gaps in between more important shows. This was soon changed as the demand for sit-coms massively grew. They are now one of the most dominant television genres around. Blackadder is a situation comedy. It is a most unusual sit-com as in each series the scene is based on a different timeline. Blackadder has been through Elizabethan times, many other timelines and important historical times, and then ends up with the final series in World War One. Most other sit-coms don't do this instead each of their different series is set on the same timeline and in the same place. This is one of the points that make Blackadder different, as in each series the eager watchers don't know what to expect. ...read more.

Baldrick is a private in the army. This satirizes the privates as being stupid and out of place fighting in such a war. Also that Baldrick is in the band, and not in the armed forces row like he should be satirizes that he is out of place in the army, and will do more good playing a triangle in a parade. As baldrick is out of place, there is still no place for him in the ranks of men as both are of equal numbers and there is no more room for him. This emphases the point even more that the dim privates are out of place in the war, and they shouldn't be put there, as they don't understand it. How can a man be expected to shoot if he can't even find a place in a band? This is the satirizing point that Blackadder is making when the character baldrick is out of position. Also in the title sequence General Melchett and Captain Darling are standing atop a podium watching the soldiers march. General Melchett is wearing cavalry clothes. This satirizes the generals in the war by showing that they are out of touch and out of date with the tactics of war. They still think that cavalry are the best option to winning a battle, but now that machine guns have been invented cavalry are useless. Yet the generals do not know this, and assume that old tactics are good, but they aren't. Captain Darling is cowering behind the General. ...read more.

This is because he doesn't understand what is going on. This is satirizing the fact that the dim people shouldn't be there, because if they don't understand what they are doing, how can they possibly fight? Captain Blackadder plays the other rank. He is the only commonsensical man in the whole warfare situation. This is how Blackadder is made funny, as he satirizes everything around him and makes fun of everything. He shares our views of the war, and tries in vain to get out of fighting just as we would, but to no amend, as the generals cant understand why he would possibly not want to go out and fight. This satirizes the general's lack of understanding. Fools surround Blackadder, this satirizes that everyone fighting was a fool, and with such stupid people everywhere, how can they win the war. It also satirizes that no one understands the war, no matter how clever or how high rank. And that everyone is as stupid as the private as they have no idea to fight a war more than he does. The equipment is the last thing that is satirized. This is done by the sticks that the 'higher ranking' officers hold. These sticks do nothing at all. "I wouldn't want to face a machine gun without one of these" George explains to Blackadder. This is satirizing the fact that some of the equipment had no purpose, and some of the people didn't have a clue what a machine gun could actually do to you. By Tom Spence ...read more.

A well written response that makes some very clear points, although at times these points could be more explicitly linked to the historical and social context of World War One. The essay took a bit too long to get going but once it did it read well.