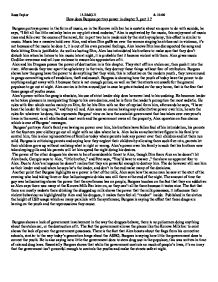 How does Burgess portray power in scene 3

How does Burgess portray power in chapter 3, part 1 ? Burgess portrays power in the form of music, as in the Korova milk bar he is ecstatic about an opera to do with suicide, he says, "I felt all the little malenky hairs on my plott stand endwise," Alex is captivated by the music, this enjoyment of music rises and falls over the course of the novel, for in part two he is made sick by the ninth symphony, this effect is similar to music. Music has a massive hold over Alex, and when Dim guffaws over the women singing he strikes out in violence, it's not because of the music he does it, it is out of his own personal feelings, Alex knows Dim has disrespected the song and feels hitting Dim is justifiable. As well as hurting Dim, Alex has intimidated his brothers to make sure that they don't disturb him when he listens to his music late at night, it is probable that it became violent with them. Alex gives music Godlike reverence and will use violence to ensure his appreciation of it. ...read more.

Alex sees no one as having any authoritative power over him, he sets the rules for whatever he does, this represents Burgess' view on how the socialist government that has taken over everyone's lives in the novel, as all able bodied must work and the government owns all the property, Alex operates on free choice which is one of Burgess' messages. Burgess' portrays Alex's family as having no power over him, his brothers have fallen foul of his intimidation, his parents let the fourteen year old boy go out all night with no idea where he is. Alex lacks an authoritative figure in his family to control him, this is also representative of families today where parents lack any power over their children and let them run wild. Burgess is criticising parents and saying how they neglect their children by allowing them such free rein, parents let their children grow up without realising what is right or wrong. Alex's power over his family is such that his brothers now take sleeping pills and his parents will let him spend the night doing his desires. ...read more.

Published in the sixties the height of LSD usage which as many parallels with the synthmesc, Burgess is saying the effect that these drugs are having on the youth and the repercussions they cause. Burgess shows a lack of government involvement in the way the drogues behave, there is no policemen doing anything about the stolen car, or the destruction of it. The fact the government allows the places like the Korova Milk bar to exist shows the lack of power the government possesses. There is the fact that Alex boasts about the flags from his corrective schools, similar to the way today's generation brags about the ASBO, Burgess is saying how little the government does to correct the youth. He is also saying how little the government does to stem drug use in the populace, this was written in time of relaxed drug laws. Essentially Burgess shows that while the government controls so much of people's lives, it's an irony that the government isn't powerful enough to controls the youths and make the streets safe at night. ?? ?? ?? ?? Ross Taylor 13-RMG-H 8-10-06 ...read more.