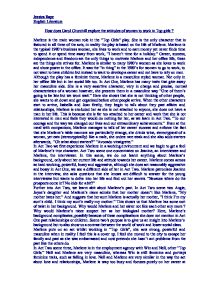 How does Carol Churchill explore the attitudes of women to work in Top girls ?

Jessica r**e English Literature How does Carol Churchill explore the attitudes of women to work in Top girls ? Marlene is the main woman role in the "Top Girls" play. She is the only character that is featured in all three of the acts, in reality the play is based on the life of Marlene. Marlene is the typical 1980's business woman, she lives to work and to earn money yet never finds time to spend it or spend time away from work, "I haven't time for a holiday." Career, success, independence and freedom are the only things to motivate Marlene and her office life, these are the things she strives for. Marlene is similar to many 1980's women as she loves to work and show power in the office. It was the "in thing" in the 1980's for women to go to work, to not want to have children but instead to want to develop a career and not have to rely on men. Although the play has a feminist theme, Marlene is a masculine styled woman. ...read more.

like a male, she orders rare steak and she also adds starters afterwards, "Oh what about starters?" "Avocado vinaigrette." In Act Two we first experience Marlene in a working environment and we begin to get a feel of Marlene's true character. Act Two scene one concentrates on Jeanine, an interviewee and Marlene, the interviewer. In this scene, we do not learnt anything about Marlene's background, only about her current life and attitude towards her career. Marlene comes across as hard-working, powerful, bossy and aggressive, although she does act reasonably aggressive and bossy in Act One, we see a different side of her in Act Two. Marlene patronises Jeanine in the interview, she asks questions that she knows are difficult to answer for the young interviewee but wants to delve into her life and find out her secrets. "Because where do the prospects come in? No kids for a bit?" Further into Act Two, we learnt abit about Marlene's past. In Act Two scene two Angie, Joyce's daughter and Marlene's niece admits that her mother doesn't like Marlene, "My mother hates her." And suggests that her aunt Marlene is actually her mother, "I think I'm my aunt's child. ...read more.

Nell and Marlene are very similar in the way the act about love and relationships, Marlene is way too busy and focuses purely on her career at "Top Girls", Nell does have a relationship with Derek but is more work orientated than Win. Nell knows that she could marry Derek, but does not want to as she wants a successful career more. "I could go on working and not marry him." Nell appears to take after Marlene in the work place, however we do not know who has worked their the longest, we simply know that Marlene is being promoted. But this could be, I feel, because Marlene is powerful and pushy and knows that she wants from her career. Nell may be abit more relaxed when it comes to the hierarchy. I feel that, as Marlene is the main character in the play she has the most power. She does however, also portray power through her character and style of living. She is the leader of all groups she is part of, the group at the meal, the group of girls at "Top Girls". Although the group of girls at the meal is not a workplace for Marlene, she still presents strongly her masculine attitude towards work and towards others. ...read more.