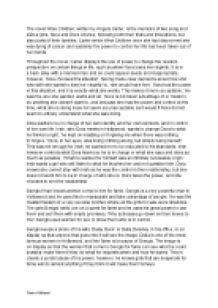 How does Carter portray power throughout the novel Wise Children?

﻿The novel Wise Children, written by Angela Carter, is the memoirs of two song and dance girls, Nora and Dora Chance, following both their trials and tribulations, but also parts of their families. Carter wrote Wise Children once she had discovered she was dying of cancer and suddenly the power to control her life had been taken out of her hands. Throughout the novel, Carter displays the use of power to change the readers perspective on certain things in life, such as when Nora loses her virginity. It is in a back alley with a married man and so could appear seedy and inappropriate, however, Nora chooses this situation, having made clear decisions about how and who with she wants to lose her virginity to, ?she would have him.? Nora has the power in this situation, and it is exactly what she wants. This makes it more acceptable, ?He was the one she wanted, warts and all.? Nora is not taken advantage of or made to do anything she doesn?t want to, and ...read more.

use them and sell them with empty promises, ?Why actresses go down on their knees to me!? Gengis uses women for s*x to show them who is in control. Gengis keeps a photo of his wife ?Daisy Duck? or Delia Delaney in his office, in on display so that anyone that goes into it will see the image. Delia is one of the most famous women in Hollywood, and her fame is because of Gengis. The image is on display so that the women that come to Gengis for fame can see what he could possibly make them if they do what he requests when and how he wants. This is clearly a sordid abuse of his power, however, he knows girls that are desperate for fame will do almost anything if they think it will make them famous. Dora does not let Gengis manipulate her. Gengis wants her to sleep with him however she will not, ?I?d feel ever so more comfortable if you put your shirt back on Mr Khan.? There is ...read more.

Power is displayed in many ways throughout the novel. Carter often allows the women to take control over the men, although the men in many situations try to take over and change the women, such as Dora and Irish. Irish tries to educate Dora, because he does not think she is intelligent and often thinks the sings she says are wrong, whereas she disagrees. She leaves him because she does not feel she is right for him. She is too strong willed. We could reflect the power struggle to Carter herself as she is losing control over her life and so perhaps this is why she displays power in such ways throughout the novel. Power is often taken away from the men and given to the women throughout the novel as they stand up for themselves and their lives, such as Tiffany and Tristam, when Tiffany will not marry him simply because she is having his child. Carter shows the men in the novel to be flawed throughout the novel, as their grasps on power fail as she dispels the idea of male superiority throughout Wise Children. 1035 words Claire Gilliland ...read more.