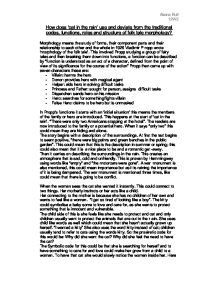 How does cat in the rain use and deviate from the traditional codes, functions, roles and structure of folk tale morphology?

How does 'cat in the rain' use and deviate from the traditional codes, functions, roles and structure of folk tale morphology? Morphology means the study of forms, their component parts and their relationship to each other and the whole in 1928 Vladimir Propp wrote 'morphology of the folk tale'. This involved Propp studying a group of fairy tales and then breaking them down into functions, a function can be described by "function is understood as an act of a character, defined from the point of view of its significance for the course of the action" Propp then came up with seven characters these are: - Villain: harms the hero - Donor: provides hero with magical agent - Helper: aids hero in solving difficult tasks - Princess and Father: sought for person, assigns difficult tasks - Dispatcher: sends hero on his mission - Hero: searches for something/fights villain - False Hero: claims to be hero but is unmasked In Propp's functions it starts with an 'initial situation' this means the members of the family or hero are introduced. ...read more.

She uses child like words as well which could mean that she hasn't actually grown up herself. "I wanted a kitty" She also uses the word kitty instead of cat; children usually tend to refer to cats using the words kitty. So the proairetic code for this would be: Why did she want the cat? Why did she feel the need to have the cat? The Symbolic code for this could be that she is searching for herself and to have something to care for and love could make her grow from a child to a woman. To have that cat she would slowly notice the women inside her. Here she might realise 'mirror stage' when the child realises that they are separate from the mother and the rest of the world at this point the child becomes an individual. To have the cat she may realise that she is her own women and she is separate from her mother and her husband. ...read more.

He is already a man and she still feels like a girl. The husband could also be a false hero in the story. This could be because maybe the husband enjoys having his wife being like a child because he can have her under control and if she becomes a women she will want more power. The female sign means love and goddess. The sign also looks like a mirror and in the story she looks at a hand mirror. "She went over and sat in front of the mirror of the dressing table looking at herself with the hand glass" With her looking at her profile could this be that she is a goddess or is she a nobody. At the end of the story the women gets the cat. "In the doorway stood the maid, she held a big tortoiseshell cat pressed tight against her and swung down her body" This could mean that the women is finally realising that she is becoming a women. The padrone had sent it to her so in the end the helper has provided the hero with the magical agent. ?? ?? ?? ?? Alaina Bull 12W2 ...read more.