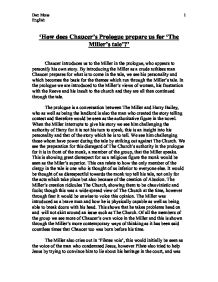 How does Chaucers prologue prepare us for the millers tale?

'How does Chaucer's Prologue prepare us for 'The Miller's tale'?' Chaucer introduces us to the Miller in the prologue, who appears to personify his own story. By introducing the Miller as a crude ruthless man Chaucer prepares for what is to come in the tale, we see his personality and which becomes the basis for the themes which run through the Miller's tale. In the prologue we are introduced to the Miller's views of women, his frustration with the Reeve and his insult to the church and they are all then continued through the tale. The prologue is a conversation between The Miller and Harry Bailey, who as well as being the landlord is also the man who created the story telling contest and therefore would be seen as the authoritative figure in the novel. When the Miller interrupts to give his story we see him challenging the authority of Harry for it is not his turn to speak, this is an insight into his personality and that of the story which he is to tell. We see him challenging those whom have power during the tale by striking out against The Church. ...read more.

The monk was asked to speak after the knight as the host wanted a 'better man' than the Miller, an uncontroversial reference at the period to the Miller's rank in society. However this is also a potential insult towards the miller personally, as his morals and his mannerisms have been shown to be uncouth and frowned upon by some members of the group; this shows us the class systems set in Chaucer's time. Again we are shown that the Miller has a modern way of thinking, as he is challenging his stereotype and does not feel that he should be treated differently because of his heritage. Everyone one is on the same journey, and they are staying in the same places, however some were thought of as better than others and by putting them all into the same situation. Chaucer is attempting to show that underneath everyone is the same and showing his view of the class system. This sets us up for how he has the Miller's tale turn these classes around; the clergyman who is mocked, the rich man who is cuckolded and the woman who has free independent thought. The tale of the knight was an aristocratic romance telling of the competing love of two young men for a beautiful girl. ...read more.

Oswald and ospney are too similar to avoid and I believe that it was this which created the greatest doubts in the reeve's mind. We know that this had an effect on the reeve as in his own prologue it is said that 'Nor at this tale did I see one man grieve, Save it were only old Oswald the reeve,'. Rather than being irritated we know that the reeve is hurt inside as his tale tells of a miller who 'wrestle well' and steals from others. This reference is to the Millers prologue in which his wrestling abilities and brawn are shown off and we are also told of how he charges 'thrice' what he should for his produce. The Reeve tries to insult every part of the Miller and therefore we see from the vindictiveness of his counter attack that the Miller appears to have crossed the line. And he has done so In the same way that he insulted the knights story and he interrupted a monk. The Miler's prologue shows this friction, and conflict . This is what we are prepared for as conflict is what the tale is about. Conflict between characters in the tale, conflict between the miller and members of the group and Chauces conflict with views he disagrees with dominates the scene. ?? ?? ?? ?? 1 Dan Moss English ...read more.