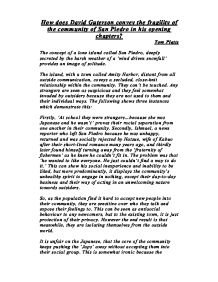 How does David Guterson convey the fragility of the community of San Piedro in his opening chapters?

How does David Guterson convey the fragility of the community of San Piedro in his opening chapters? Tom Platts The concept of a lone island called San Piedro, deeply secreted by the harsh weather of a 'wind driven snowfall' provides an image of solitude. The island, with a town called Amity Harbor, distant from all outside communication, coveys a secluded, close-knit relationship within the community. They can't be touched. Any strangers are seen as suspicious and they feel somewhat invaded by outsiders because they are not used to them and their individual ways. The following shows three instances which demonstrate this: Firstly, 'At school they were strangers...because she was Japanese and he wasn't' proves their racial separation from one another in their community. ...read more.

So, as the population find it hard to accept new people into their community, they are sensitive over who they talk and expose their feelings to. This can be seen as antisocial behaviour to any newcomers, but to the existing town, it is just protection of their privacy. However the end result is that meanwhile, they are isolating themselves from the outside world. It is unfair on the Japanese, that the core of the community keeps pushing the 'Japs' away without accepting them into their social group. This is somewhat ironic because the Japanese are relied upon for business. Their dependency is really crucial, as the Japanese provide the workforce for the strawberry-picking sector. ...read more.

The potentially and realistic harsh weather shows vulnerability of the group as it can jeopardise their only form of income and survival. This shows that the community is averse to change. However, their routine shows their strength and ability to carry out their tasks effectively with a solid way of living. Lastly, Their lack of communication as a group limits their trust with one another, as they can't really get to know anyone new to the area. It doesn't exactly help to improve the morale of the town either. They are almost segregated from the 'Japs' and living in different societies. They can also be seen as leading a primitive lifestyle, by choosing not to interact with the rest of the world. ...read more.