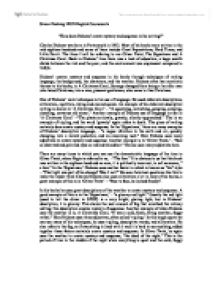 &quot;How does Dickens' create mystery and suspense in his writing?&quot;

"How does Dickens' create mystery and suspense in his writing?" Charles Dickens was born in Portsmouth in 1812. Most of his books were written in the mid-eighteen hundreds and some of them include Great Expectations, Hard Times, and Little Dorrit. The three I will be referring to are Oliver Twist, The Signalman and A Christmas Carol. Back in Dickens' time there was a lack of education, a huge wealth divide between the rich and the poor, and the environment was unpleasant compared to todays. Dickens' creates mystery and suspense in his books through techniques of writing language, the background, the characters, and the weather. Dickens often has moralistic themes to his books, in A Christmas Carol, Scrooge changed from being a horrible man who hated Christmas, into a nice, pleasant gentleman, who came to like Christmas. One of Dickens' main techniques is his use of language. He used elaborate descriptions, alliteration, repetition, listing and onomatopoeia. An example of his elaborate descriptive writing is shown in 'A Christmas Carol' - "A squeezing, wrenching, grasping, scraping, clutching, covetous old sinner." ...read more.

Another example of when Dickens uses the weather is in, A Christmas Carol, "It was a cold, bleak, biting weather; foggy withal." Here Dickens uses three adjectives, often called 'tripling.' In this single quote we can see many of his techniques, he uses tripling, descriptive words, and alliteration. He also refers to the fog, as if everything is lined with it and it is hard to see anything, added together these factors certainly create mystery and suspense. In Oliver Twist, he again uses the weather to create mystery and suspense, "the dead of the night." This is the period of time in the middle of the night when everything is quiet and the cold, foggy weather seeps through to every crack and crevice. I think this quote creates mystery and suspense as it again refers to death. Dickens characters have certainly played a big part in his success as a writer. In all three books Dickens uses great descriptions of his characters to add mystery and suspense. An example of this is in the Signalman, with his description of the Signalman, "a dark sallow man with a dark beard and rather heavy eyebrows." ...read more.

Here Dickens has a great effect on the reader as now, they are feeling sorry for Scrooge as he is realising how bad he has been to other people. The death of the Signalman, in The Signalman, is also a great shock tactic, "I waved this arm to the last, but it was no use." (This is a quote from the driver of the train.) This part of the storyline creates mystery and suspense by surprising the audience with the death of the main character. Through studying Dickens' books it is clear that he uses many techniques to create mystery and suspense. Some of these techniques include the language he uses, the weather, great descriptions of characters, moralistic themes and his use of past experiences. I think that Dickens' most effective use of creating mystery and suspense, is his elaborate descriptions, of everything. I think these descriptions really make the reader think and imagine the vivid descriptions that Dickens' uses. I believe that this would not be possible if Dickens' did not use such great descriptive writing and many other of his techniques. ?? ?? ?? ?? Simon Docking 10GN English Coursework ...read more.