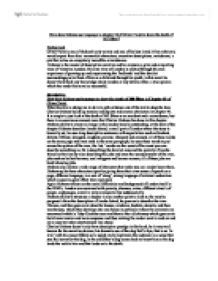 How does Dickens use language in chapter 50 of Oliver Twist to show the death of Bill Sikes?

How does Dickens use language in chapter 50 of Oliver Twist to show the death of Bill Sikes? Background Oliver Twist is one of Dickens' early novels and one of his best loved. It has what you would expect from him: memorable characters, evocative descriptions, melodrama, a plot that relies on completely incredible coincidences. Dickens is the master of descriptive narrative and he conjures a grim and compelling view of Victorian London. His over view of London is created through his own experience of growing up and experiencing the 'badlands' and the derelict surroundings put in front of him as a child and through his youth, in this novel he doesn't hold back any knowledge about London or any details either, a true opinion which has made this novel so successful. Introduction How does dickens use language to show the death of Bill Sikes in Chapter 50 of Oliver Twist. What this title is asking me to do is to pick evidence out of the text to describe how Charles Dickens builds up tension and depicts and creates characters in Chapter 50. It is simple to just look at the death of Bill Sikes as an accident and a coincidence, but there is an enormous amount more that Charles Dickens has done in this chapter. Dickens ability to create an image in the readers head is outstanding, at the start of the chapter Dickens describes Jacobs Island, a small part of London where the story is basically set, he uses long descriptive sentences with superlatives such as blackest, dirtiest, filthiest, strangest, roughest, poorest, cheapest and coarsest, all of these words on the same page and even most in the same paragraph, he uses these words to put across his opinion of the area, the 'est.' ...read more.

Also the use of slang, the language of the criminal class, 'strait-wescut which is a straight jacket or 'this is a smash' which is typical cockney rhyming slang in east end London common among thieves. Dickens dialogue also gives the reader additional information, e.g. Fagin being arrested at The Cripples which was a pub all the locals went to, especially the criminal cockney types, and the fate of the rest of the gang, Dickens didn't write about them directly because he wanted suspense and use a flashback scene , on page 488 Chitling has a flashback, 'you should of heard the people groan', said Chitling, 'the officers fought like devils, or they'd have torn him away. He was down once, but they made a ring round him, and fought their way along. You should have seen how he looked about him, all muddy and bleeding, and clung to them as if they were his dearest friends. I can see 'em now, not able to stand upright with the pressing of the mob, and dragging him along amongst 'em; I can see the people jumping up, one behind another, and snarling their teeth making at him; I can see the blood upon his hair and beard, and hear the cries with which the women worked themselves into the centre of the crowd at the street corner, and swore they'd tear his heart out!' which is showing Bets ordeal when she was dragged away in a straight jacket in a flashback that was not described in the early parts of Oliver Twist, this is used to explain to the reader and sort of add more pieces, or the missing pieces to the 'puzzle'. ...read more.

The way Dickens depicts the death of Sikes is very dramatic in the way that he dies, jumping off a roof and accidentally hanging yourself isn't the best way to go or the most common in any story, Dickens used this way of death to give justice, melodrama and a gothic feel which would add real feel to how the audience would feel at the death of a person who has been hated by most throughout the whole story. The speed of Sikes death is quite important, the use of verbs such as staggering, tumbled, which is when Sikes loses his balance and goes over the edge of the building. Sikes death is also set at night time to add a little more drama and a chase factor to the dramatic end. The noose in those times was common for convicted murderers to receive when arrested, so for Sikes to die in a noose was justified in the end. Dickens had a message to the reader in the end of this chapter which is to draw attention to a range of social injustices in those times, which means a lot of people getting away with crimes which obviously dickens felt strongly about, Dickens didn't just simply tell people about this he used a range of techniques to excite the reader and to please the reader. Overall Dickens created this chapter to avenge Nancy's death, we know this because Sikes cries 'The eyes again!' referring to Nancy's eyes. Which leaves the reader feeling happy about Sikes death and making the reader want to read his next edition in his paper. ?? ?? ?? ?? ...read more.