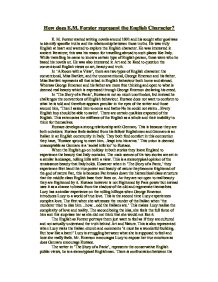 How does E.M. Forster represent the English Character?

How does E.M. Forster represent the English Character? E. M. Forster started writing novels around 1901 and his sought after goal was to identify specific truths and the relationship between those truths. He was truly English at heart and wanted to explore the English character. He was interested in ancient literature; this was his reason for travelling abroad to such places like Italy. While travelling he came to know a certain type of English person, these were who he based his novels on. He was also interested in Art and he liked to question the conventional English views on art, beauty and truth. In 'A Room with a View', there are two types of English character: the conventional, Miss Bartlett, and the unconventional, George Emerson and his father. Miss Bartlett represents all that is bad in English behaviour both home and abroad. Whereas George Emerson and his father are more free thinking and open to what is deemed real beauty which is expressed through George Emerson declaring his creed. In 'The Story of a Panic', Eustace is not so much unorthodox, but instead he challenges the conventions of English behaviour. ...read more.

This makes Lucy realise the complexity of love and reality. The second being the kiss, she feels the full force of him and this surprises her as she did not think that she would not like it. The English as Forster portrays them just want to feel as if they are cultured and not actually understand the truth behind Art and Nature. This is also represented when Lucy visits the Italian church and comments 'it must be a wonderful building. But how like a barn!' Lucy is struggling between what she is supposed to feel and how she really feels. Mr. Emerson encourages Lucy to expose her true emotions as does Gennaro encourage Eustace. The writer in 'The Story of a Panic', represents the conservative English public views, he is a stereotypical Englishman. There is confrontation between the young and old when the writer interacts with Eustace as there is when Lucy talks with Miss Bartlett. As Eustace, like Lucy, is relatively young, he is still trying to discover himself as a person and is able to be influenced by characters like Gennaro or George Emerson. ...read more.

The Italian coachman and his girlfriend are rebuked for kissing as this is seen as lower class. This makes the modern day reader of 'A Room with a View', realise the ridiculous of conforming to society. Later on in 'A Room with a View', we encounter another clash between Cecil and Lucy. Lucy, having experienced the style of life that George Emerson experiences, in Italy, she can not bear the n**e English Cecil. He stands for everything that George hates and that she slowly realises that she hates. E. M. Forster does not depict the English in a good way especially on holiday. This is because although the English travel to feel cultured they prefer everything to remain as English as possible because they are afraid of the unknown. This is the reason the English appear very poorly behaved while abroad as they are uncomfortable and also stand out as they do not belong to true nature and beauty Forster in his novels investigates truth by stereotyping groups of people capturing their essence, this he does very well. The English are represented by the middle class compared to the lower class Italians however the outcome may be different if they were compared to middle class Italians. ...read more.