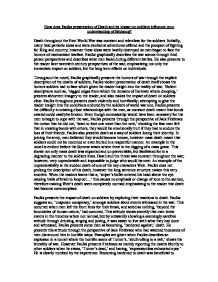 How does Faulks presentation of Death and its impact on soldiers influence your understanding of Birdsong?

How does Faulks presentation of Death and its impact on soldiers influence your understanding of Birdsong? Death throughout the First World War was constant and relentless for the soldiers. Initially, many held patriotic ideas and were excited at adventures offered and the prospect of fighting for King and country; however these ideas were hastily destroyed as men began to face the horrors of mechanized warfare. Faulks graphically describes the war scenes through third person perspectives and describes what men faced during different battles. He also presents to the reader later twentieth century perspectives of the war, emphasizing not only the immediate impact on soldiers, but the long term effects on individuals. Throughout the novel, Faulks graphically presents the horrors of war through the explicit description of the deaths of soldiers. Faulks violent presentation of death itself shows the horrors soldiers had to face which gives the reader insight into the reality of war. Violent descriptions such as, 'ragged edges from which the remains of his brain where drooping,' presents abhorrent imagery to the reader, and also makes the impact of death on soldiers clear. Faulks throughout presents death violently and horrifically; attempting to give the reader insight into the conditions endured by the soldiers of world war one. ...read more.

Becoming hardened to death was beneficial to soldiers as deaths were so numerous, it was not possible to mourn every soldier as this would have undoubtedly caused breakdowns among soldiers. Faulks shows through letters written to the home front the hidden fear men had of dying. Through the attempted optimistic phrases sent to loved ones such as, 'Don't worry about me, please,' it is suggested men felt they needed to have subvert their fear of death so as not to worry those they cared about. Contrastingly, through the perspective of Stephen Wraysford, Faulks shows the need to express fear soldiers had about death. He shows this through his letter to Isabelle, where he bluntly states 'I am frightened of dying.' Faulks presents this open attitude as being unusual as many men felt pressured to hide their fear, either because of the silent conspiracy, or because they wanted to appear strong, patriotic men who could handle the prospect of their own death. Since death in war was so numerous and horrific; the impact often led to psychological problems among soldiers. Some soldiers are presented as having accepted their fate, such as Jack Firebrace who realistically believed, 'he would fall like millions of the dead who had gone down.' ...read more.

Stephen attempts to help Douglas cope through trying to assure him that he will not die and reminds him of his wife to show Douglas what he had to live for. Through events such as this, compassion is shown by the soldiers; showing comradeship, as men did not want their fellow men to die in such horrific ways uncared for and wanted to help in any way to make the inevitable easier. Throughout the novel , Faulks presents death in a horrific manner. He graphically describes death in warfare and emphasises mass dehumanization and pain caused by mechanisation. Faulks presents the impact that relentless death had as a cause for some men to become hardened against death, for others to break down and suffer psychological problems and also prompted others to try to find ways to cope with warfare. Faulks successfully causes an impact on the reader through his blunt and detailed descriptions of trench warfare. Not only is further insight given into how life would have been for soldiers, but also Faulks gives them identities making it easier for the reader to relate to them. This ultimately makes it even more disturbing to realise the horrific deaths faced by men and also, the long term effects they may have suffered, long after the fighting stopped. ...read more.