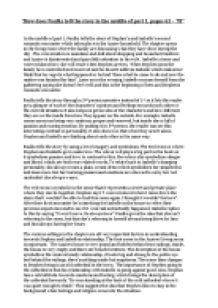 How does Faulks tell the story on pages 63-78 in Birdsong?

﻿?How does Faulks tell the story in the middle of part 1, pages 63 ? 78? In the middle of part 1, Faulks tells the story of Stephen?s and Isabelle?s second romantic encounter which takes place in the Azaire household. The chapter opens in the living room where the family are discussing what they have done during the day . The conversation is mundane and dull about shopping and household matters and Azaire is disinterested and pays little attention to his wife. Isabelle is tense and worried about how she will react when Stephen arrives. When Stephen joins the family he is controlled and reserved and he doesn?t address Isabelle which makes her think that he regrets what happened or he had ?done what he came to do and now the matter was finished for him?. Later on in the evening, Isabelle excuses herself from the gathering saying she doesn?t feel well and this is the beginning of hers and Stephens romantic encounter. ...read more.

I thought it wouldn?t be here?. After their first encounter he?s searching for Isabelle in the house to relive their previous experience and to see if it was real and actually happened. Isabelle replies to this by saying ?It won?t move. Its always here?. Faulks gives the idea that she isn?t referring to the room, but that she?s referring to herself always being there for him and him always having her heart. The various settings in the chapter are all very important factors in understanding towards Stephen and Isabelles relationship. The first scene in the Azaires? living room is important. The Azaires house is very grand and hidden behind iron railings. Inside, the house is very empty and there isn?t much furniture. The description of the house symbolizes the Azaires family relationship, it looks big and strong to the public eye but behind the railings, there?s nothing inside but emptiness. The scene then changes to Stephen being in an old cathedral in the town. ...read more.

. It seems like he?s telling Isabelle all of these personal details instead of Azaire. Azaire doesn?t seem to be the type of person who would be interested in feelings and emotions as he communicates on a different level about more trivial things. Stephens?s stories are for Isabelles benefit so she can fully understand him. There is a lot of non-verbal communication between Stephen and Isabelle as they watch each other during the evening and recall privately what has gone on earlier. Isabelle is embarrassed by her recollections of their lovemaking and becomes uncomfortable by Stephens gaze, which seems to be saying things to her without any words passing between them. There is a big contrast between her relationship with her husband and with Stephen. The way she communicates with her husband is matter of fact and they talk about trivia but when she is with Stephen they talk about their emotions and their lovemaking in an open way, which surprises them. When she is with her husband she is restrained, cold and unresponsive and she is startled by her behavior with Stephen and by her emotion and feelings. ...read more.